or turn off mode:

Can you boot this image to sd card, i see you can’t upgrade through sd?

Yes, it’s 3.14, some developers are getting the mainline linux running on Khadas VIM, but still not quite stable now, so will keep 3.14 for a while.

Is it possible to boot this image from sd card, i see you can’t upgrade it with sd?

I don’t want to overwrite Android for now, Ubuntu will be on sd card until proper hw acceleration is available for it.

OK, will release a new ROM with SD Card installation.

Not everyone wants to replace Android, so every time you release new image, there has to be an sd image too.

Can i create a bootable sd using this image, i do have win10, if it isn’t something complicated, i am willing to do it, just need clear instructions?

Hi, Tommy21:
This ROM/image cannot boot from sd card, but I still recommend you take a try with this ROM on eMMC as following reasons:

Thanks, but i did set up Android the way i want to, i don’t want to lose app and data on it, i know eMMC is faster, but without proper hw acceleration, Ubuntu is not on my favorites list, but would like to check it out on sd card.

You need to make sd card images, for people who don’t care so much about Gnu/Linux.

I did bought this board because of Linux, but then i didn’t know about these issues.

I did install it on eMMC, device doesn’t seem hot, it is much better than s905x images, but i do have an issue.

Screen is not filling up the whole space, i do have black screen on the right side of my monitor, can you change the resolution, i want to use the whole screen.

Is there a way to view cpu temperatures, on Armbian builds it was armbianmonitor -m to view temperatures.

I did try 720p yt video with mozilla for a minute, video was actually watchable, device didn’t look hot.

I hope you will soon solve all the remaining issues Khadas has, but this is now much better, i would say it is usable.

Screen is not filling up the whole space, i do have black screen on the right side of my monitor

Can you tell me some information about that ?

I need to test the vim with the mali GPU in framebuffer mode.
Is possible have the patches that you are using for this kernel ?

I see that the http://www.mediafire.com/file/mjgaq6pgmnuahvf/Vim_LibreELEC_V170116.7z is working with the previous mali driver, this ubuntu has a newer version but cant works in 32bit bpp/16bpp in framebuffer mode.

I am thinking to rebuild the kernel from https://github.com/khadas/linux and apply the same mali patch of LibreElec (previous mali driver), and change the kernel to this ubuntu.
Or I could use the mali.ko from the LibreElec image ?

Also another question: working on the kernel or the drivers during the development process is a little difficult not using a standard Linux partition schema for the Ubuntu/emmc version. (Every time that are needed some changes is necessary create an image and load by tftp or sdcard).

Is possible have an Ubuntu for SD ? (with the standard partitions schema).

Or I could use the mali.ko from the LibreElec image ?

I think it can’t, as the mali.ko for LibreELEC is non-X one.

I think it can’t, as the mali.ko for LibreELEC is non-X one.

yeah what I need is Linux with mali.ko non-X one , or a mali.ko that support both X and Framebuffer.

At now on the LibreELEC and the Ubuntu-mate there is the same kernel base with different mali.ko ?

Hi Terry, i don’t know the exact model, i’m not at home so can’t check, it’s older philips lcd, output resolution is 1920x1080, i should note that it is connected with hdmi to vga adapter.

Might I know what’s your purpose to run mali with non-X?

Yes, the same repository, but with different commits. We’ve open the LibreELEC source code at our Github, you can check here for more details.

A photo would be helpful to us to better understand the problem you got now.

Do the Android OS works fine with the same monitor + HDMI-to-VGA adapter?

Might I know what’s your purpose to run mali with non-X?

Android didn’t have this issue on the same monitor, i will take a photo when i get home. 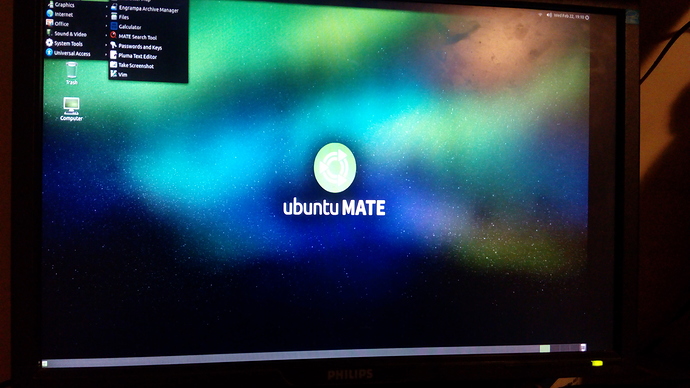 You can see the screen on the right, i have black border, can this be fixed?