With the “stock” Khadas 3705 Cooling Fan and New VIM Heatsink, the equilibrium temperature is around 51C, at 25C ambient, on the VIM3. This is again running the SoC at maximum load using the Antutu 8 stress test. Notice that due to the New VIM Heatsink’s small thermal mass, it reached equilibrium a lot faster than @RRZC777’s large passive heatsink.

This test only took 30 minutes, and the 3705 cooling fan was set to “automatic speed mode” from within Android. The sharp dips at the start of the test was myself placing my cold fingers onto the heatsink, notice that since my body temperature is around 37C, my fingers sucked heat out. The second sharp dip is myself restarting the test around the 15 minute mark. 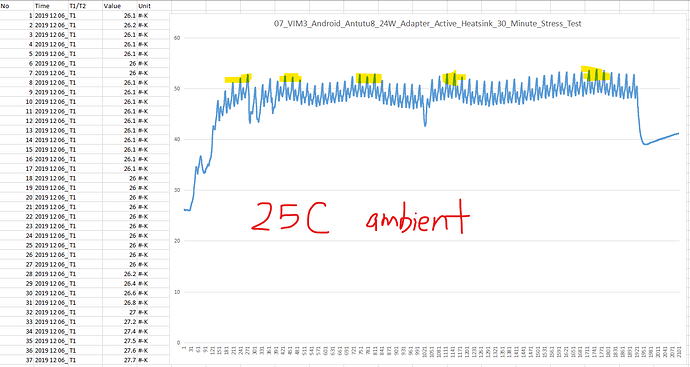 @karibu active cooling would be the best option for your VIM3 cluster. I would only recommend passive cooling for the VIM3L.

30-minute Antutu 8 stress test on the Edge-V (RK3399), using @RRZC777’s large passive heatsink. I stopped the test at 30 minutes, as the SoC was experiencing significant thermal throttling, and since our aim is to avoid that, I saw no need to proceed further.

Ambient temperature was at 30C, and the likely equilibrium temperature would be 75-80C. This is already too hot for most people’s standards. 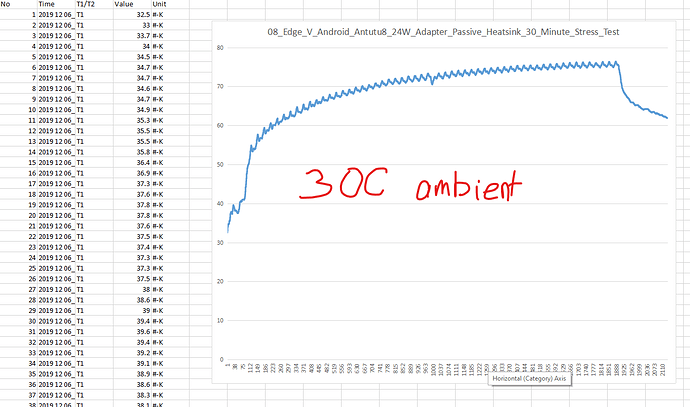 it would be logical to come up with something on top of the processor itself, and not under, for a better effect

VIM3L works just fine with it on the bottom. You’re referring to the VIM3 and Edge-V?

you did the vim3l test on the android system, try it on Ubuntu …

Yes I will get to that eventually.

By the way, there is a special program for measuring temperature, which is much more effective,
CPU Throttling Test.

App loads CPU with up to 100 threads and measures performance. If phone can handle CPU cooling (most can't) performance will stay constant, but if it can't CPU will start to throttle and speed will decrease. This app displays performance on a graph and measures maximum, minimum and average performance. After testing app will analyze data to find if and how much CPU throttling happened. Application has built in benchmark which tests java and native C single and multi threaded performance. CPU ...

In any case, thank you for not disregarding this!

You’re welcome! Now my issue is: should I rerun the tests using CPU Throttling Test…or move on to Ubuntu? Ah choices choices. Temperature is higher today too, 28C (with the air conditioner, 30C is a little too high for my liking, my brain is starting to throttle)

in the program you can set the time and flows, and what to choose, you decide

and then create a super-radiator, for our khadas 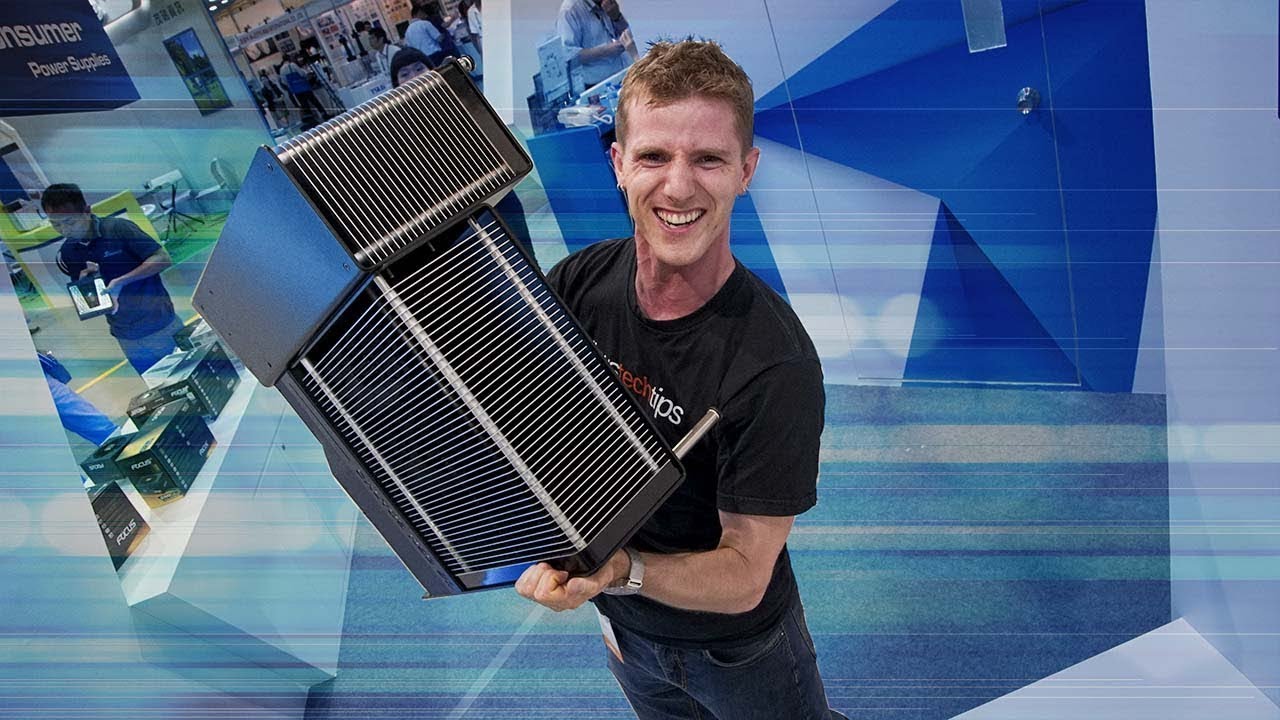 this radiator will crush our khadas

Just to properly end-off this round of testing with Antutu 8, here’s the final result for Edge-V with active cooling (3705 fan + new vim heatsink), and using the 24W adapter. The fan was again running at “automatic speed mode”, and I note that it definitely sounds louder as compared to when it was stuck onto the VIM3. 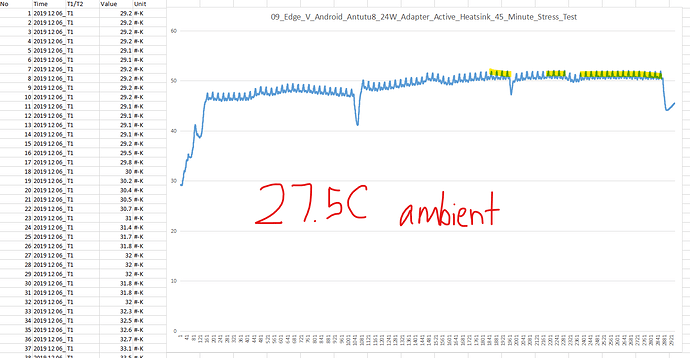 it would be logical to come up with something on top of the processor itself, and not under, for a better effect 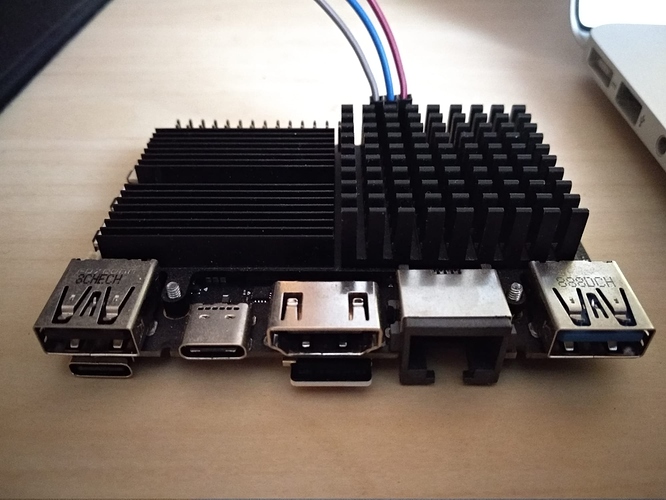 This is what I made with the 35x35mm generic heatsink with a thermal pad under. The idea for a totally passive top heatsink would be this, but as a whole block of 70x35mm, 15mm tall instead of the 5mm height that the actual heatsink has (my addition is 10mm height). The problem I see with the bottom heatsink is not that it’s in bottom per se (although its a problem since hot air goes top) but the thickness of the thermal pad to avoid touching bottom connections with the metal plate. Metal has much more thermal conductivity than thermal pads, and the thicker it is the more it insulates, it should be only a layer to fill the gaps between metals alas thermal paste.

Or just the metal plate without the left heatsink part so we can add the heatsink we want that fits our user case?

and what are the test results?
Then high hinges are needed to close

and what are the test results?

I will tell you once I manage to fix the SPI flash booting (from serial debugging) since now my board it’s a paperweight not being able to boot from SD/EMMC. Waiting on another thread in Technical Support for some help

@karibu - im building a cluster - using small heatsinks on each vim3 with a fan over all of them. Will be building this weekend and will post pictures / design info

@Vladimir.v.v results of the testing with “CPU Throttle Test v1.3.4”. I’ll need your help interpreting the results, because I’m unfamiliar with this program.

The only thing I know is that the blue lines represent throttling - I think. I also recorded the SoC’s surface temperature with the probe, just to be sure. 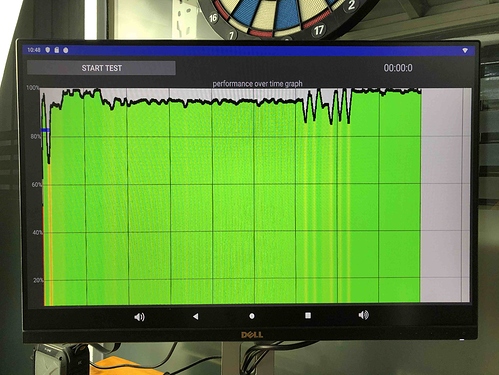 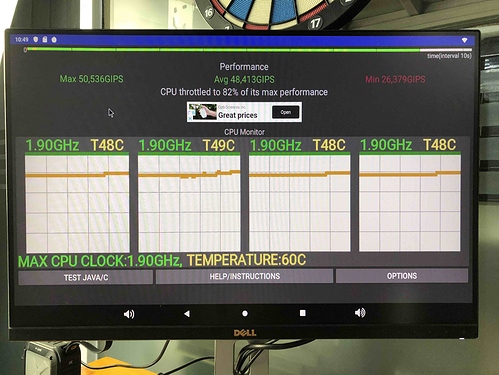 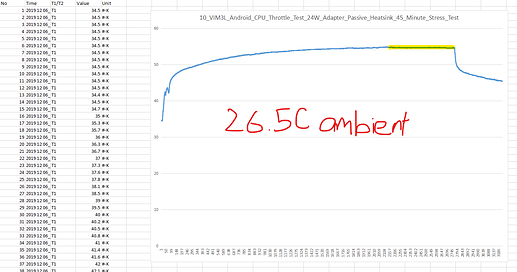 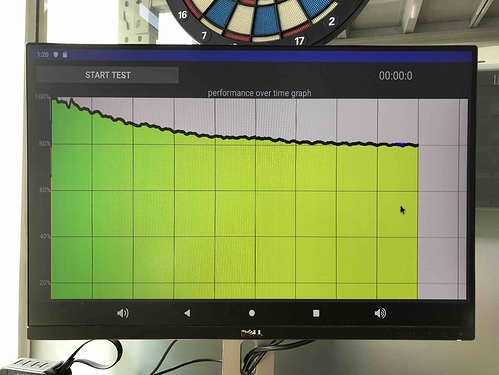 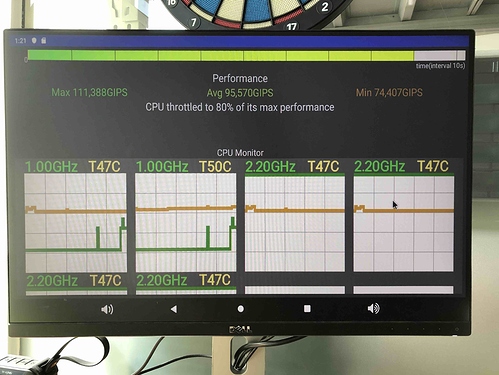 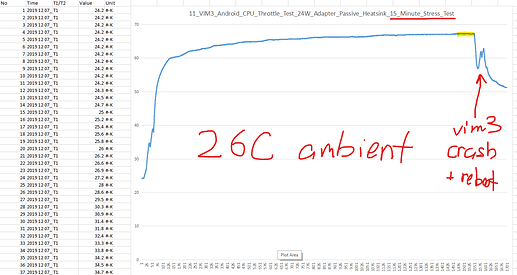 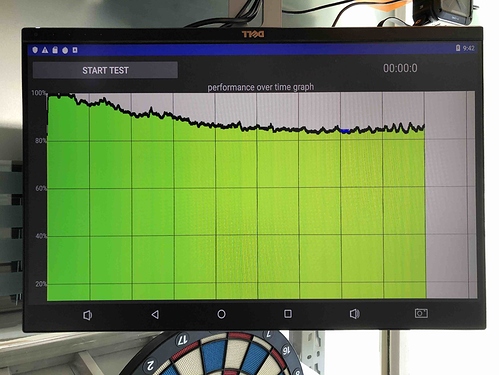 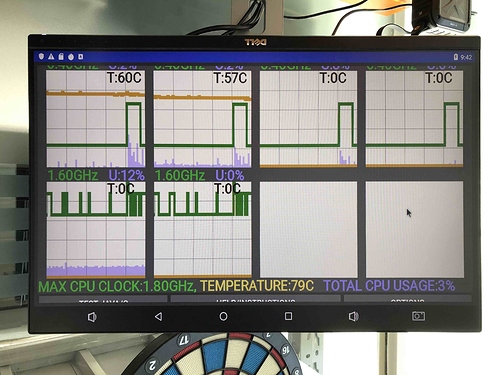 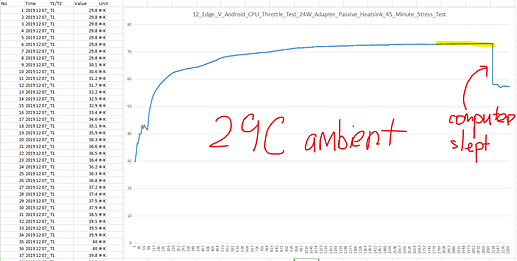 Overall, I feel the Antutu 8 Stress Test is more “stressful” than the CPU Throttle Test, especially on the Edge-V. You can see that during Antutu’s test the temperatures were a lot higher. Even though the ambient temperature was about the same: 29 - 30C (assuming heatsink-ambient temperature relationship is linear)

What do you mean? Did I set the CPU temperature sources incorrectly?