How can I use fenix to generate an EMMC VIM3L image with linux mainline?

No eMMC installation for VIMs with mainline kernel.

But you can boot from SD card and write the image to eMMC with command emmc-install.

will it be available? why is this restriction?
I need to generate an image for the end-users to flash…

If u have some linux skill ! i can share howto generate Krescue installation EMMC image (kresq)

another way !! just make dump from EMMC to SD (same use Krescue) and install it after

Upstream Linux has some functional limits depending on your use-case, but everything needed to boot an image on VIM3L is available. e.g.

is this the same linux source as the one fenix generates?
By any chance does it have DRM/KMS enabled and working?
I use GPIO, ADC, DSI and touchscreen input… is any of these lacking?

Thank you so much !

DRM/KMS is working (8-bit output, 10-bit is WIP still). The GPIO stuff should work but isn’t tagged and described in device-tree like it is for older VIM devices and legacy kernels. No idea about ADC/DSI as I don’t use them (or Fenix) … but shouldn’t be much effort to test and look.

Sounds great, I’ll give it a look…

OK! i have check it !
this image same suitable for EMMC / same as for SD (sure its for simple direct write - no need aml_burn_software ) 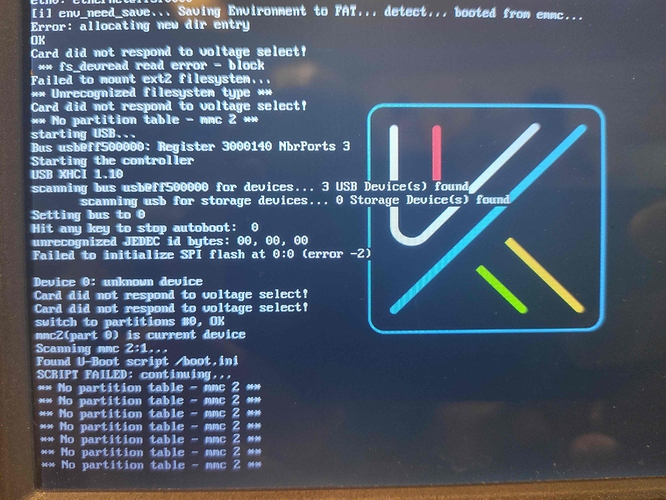 When I erased EMMC via Kresque, booted this image from SD, ran “emmc-install”, I got the similar result.
Any suggestions how to fix it?

hi, maybe you need to restore the bootloader, first use USBBurningTool to restore, and then repeat the procedure with sd

USBBurningTool does not work on VIM3L due to a DDR issue. Also, when I write old Bionic-4.9 image in EMMC via Kresque, it boots just fine.

USBBurningTool does not work on VIM3L due to a DDR issue

cannot be this, where did you get such information?

you could mistakenly take the firmware from vim3, then there could be an error! pay attention to it!

where did you get such information?

It was discussed earlier in this topic: Anyone successfully flashed Linux on VIM3L without bricking it?

Yes! exactly as @Vladimir.v.v said , @vkozloff did you flash the correct image file, in the case of DDR error it indicates the Wrong image file, please verify the image.

By the way, for fun, you can try different versions of USBBurningTool, there is information that they behave differently, you need to check of course

By the way, for fun, you can try different versions of USBBurningTool, there is information that they behave differently, you need to check of course

but the recommended version is v2.2.0

the recommended version is v2.2.0

If always fails with the following result: 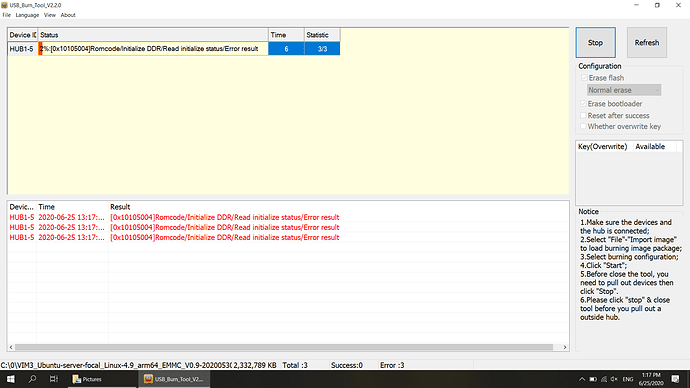 Untitled1920×1080 148 KB
I have tried three VIM3L with this result; on the same PC I can flash VIM1 without error. That’s why I am looking for any method to flash Ubuntu with new U-Boot and mainline kernel to VIM3L’s EMMC.
next page →