I think it would have to be spoofed as some other approved ATV device.
Did you look for Cellcom app in the Aptoid App?
If you can get the APK for the app from somewhere, maybe it could be side loaded.

Approved by Google as an official Android TV device?

I also found this:

Does the app shows in the playstore(this rom playstore)?

No. When i check on browser it shows no support for mi device

Android TV rom only shows Android TV compatible apps on the store, download the apk put in a usb stick or whatever… and install it, or search in Aptoid app that come with the rom!
Im going to rls another rom but that one not base on Android TV, so on that one it should apear… but you will lose most of the android tv stuff like Youtube 4k, the launcher and other stuff! 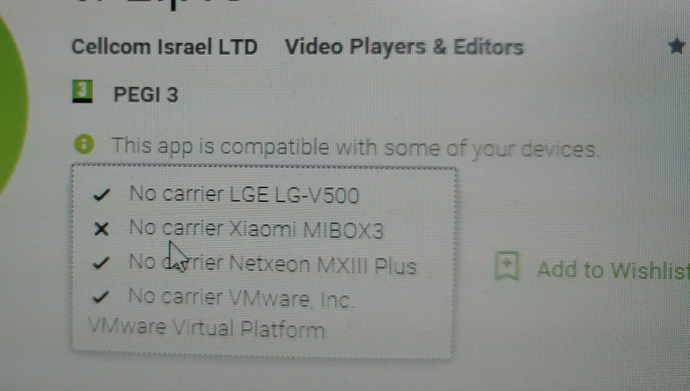 I am not sure that this app is not part of atv inventory. I thought the reason i did not find it was device approval.

Hmm that is different, really weird they are blocking it…
Well you need to edit the build.prop for that!

No one noticed the strange behavior of the mouse scroll wheel? It makes 2 clicks down and returns to the top (Logitech anywhere mx). Side scrolling in Google Play is very sad) Noted that the speed of wifi on version 8gb (2.4 ghz) is several times lower than on other devices such as SGS6 edge. 15Mb against 65Mb (router in 1 meter). Is it just for me?
And yet unfortunately 8GB VIM does not support 5ghz…

The IR remote works well navigating Vim-ATV, keyboard directional keys also work well. On scroll wheel, I have to be careful not to scroll more than about 2-3 clicks or it does what you say, don’t know if that is typical on ATV, as I think it was designed to work with remotes, primarily.

Side scrolling in Google Play with keyboard direction arrows or IR works very well. Mouse works well too, but if there is any inadvertent up/down mouse movement when trying to side scroll with the mouse, it will break out of side scroll and move up or down. I am not overly familiar with ATV, but I would suspect this is normal.

I get 45~60 Mbps on the Pro on 2.4GHz. But of course this is on a different WiFi module, AP6255(Pro), AP6212 Vim 8GB.
Have you tried Wifi Analyzer to see what channels are best received by the Vim? Then you could change the channel on your router for best performance.
Also, check the antenna’s connection to the PCB to make sure it is well seated.

Superceleron does not yet have the Vim 8GB, but that may change.

Thank you, about channels I guessed. become a better, but a bit. about HDMI-cec. TV very often loses connection. have to set up again or switch to another source.

I don’t use CEC with the Vim, so hopefully others can help with this.

Thank you, about channels I guessed. become a better, but a bit. about HDMI-cec. TV very often loses connection. have to set up again or switch to another source.

use the CEC fix in the app that have a little devil face, you need to enable root for that app to work ok!

Can you get 4K Netflix with this ROM?..

Can you get 4K Netflix with this ROM?..

hey superceleron,
thanks for the ATV Rom, the Netflix App (from playstore) is not working on my Vim(tvq-pb-103 error…), so i checked the widevine level and its only level 3…is there a way to get this properly working?

hey superceleron,
thanks for the ATV Rom, the Netflix App (from playstore) is not working on my Vim(tvq-pb-103 error…), so i checked the widevine level and its only level 3…is there a way to get this properly working?

The rom already comes with a working netflix app, is the one from the mobile devices because the one from android tv dont work and it never will on this devices!

hmm, download link is broken for me.
I also can’t find the rom anywhere to test out.

*im vnc’ing to my workstation on a nokia n900 so the issue may be my end.