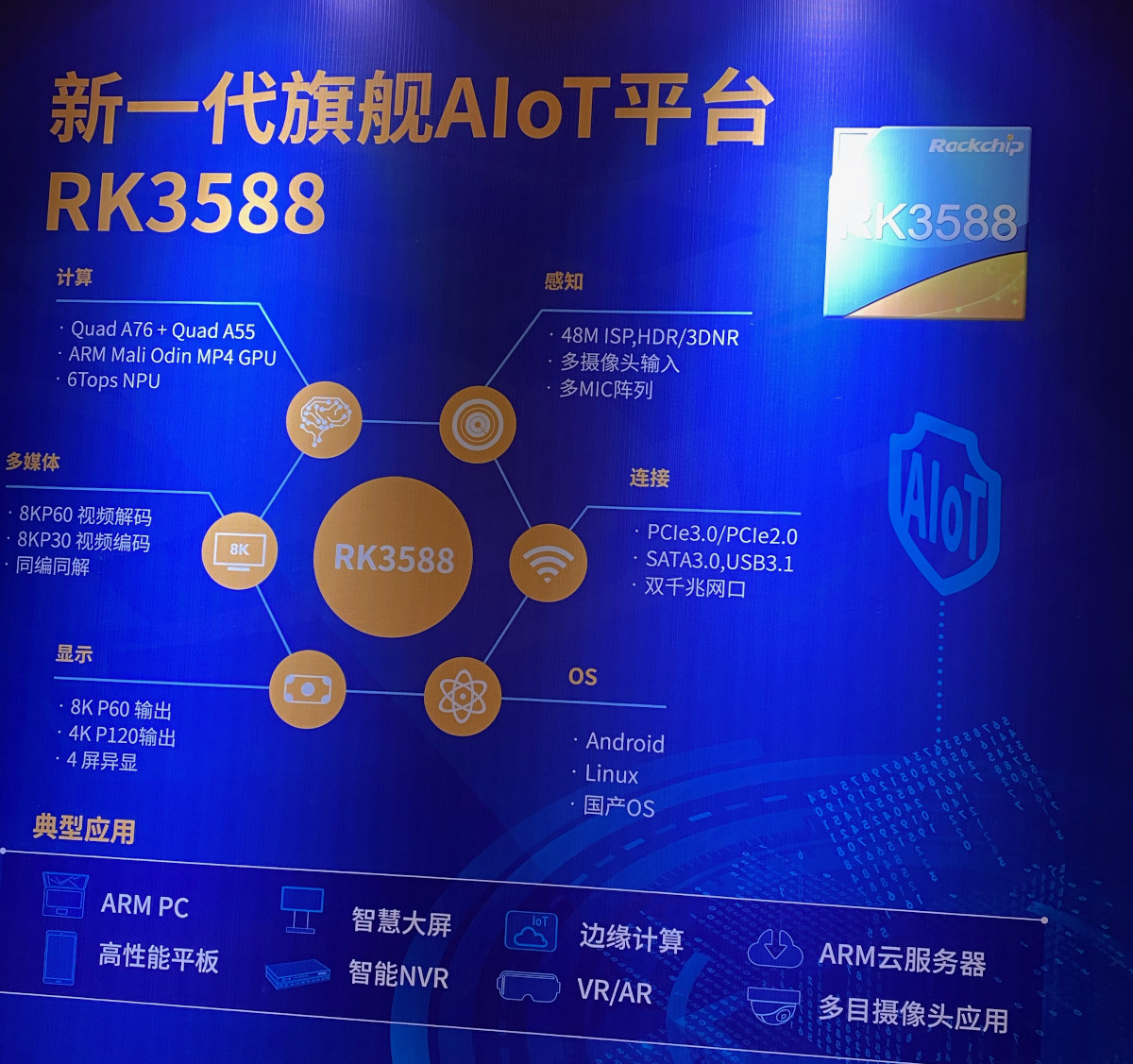 yes, this came out yesterday, talked about it on the khadas discord.

its odd with the ability for upto 32GB of maximum memory allocation. the maximum that is really “necessary” is probably only 16GB, and that’s for hardcore users that are probably using it for their Linux desktop and such. not for someone doing video playback, Media playback or something like that, 4GB is enough in that case.

PCIe and the PCIe 2.0/ SATA switch is something that is cool. hopefully with this better PCI controller, you could try something like add a GPU or such, and not be halted by BAR memory limitations and such.

good chip, waiting for its release in q2 of next year.
hopefully I expect Khadas will tinker with it, and release the Edgev2 or such by next Christmas.

Pay attention, the terms have also been shifted, I am sure there will still be changes in terms of characteristics, possibly minor.

Yep, we joined the RKDC and we have the latest information

Edge2 will be a powerful ARM PC. 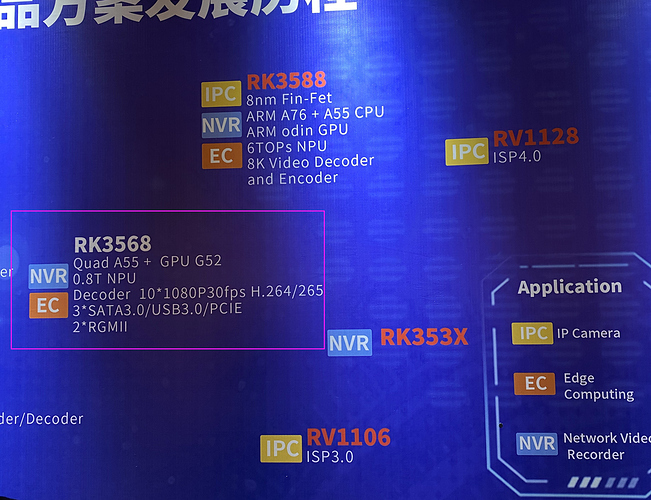 then its just the beast RK3588, that’s great
looking forward to it

Yes but just make rk3588 desktop class hardware and push its support to kernel then distros will get you best software.

Cannot wait for rk3588 boards to be out.

I too have been thinking much about the 3588 since first hearing of it. Also looking forward to Khadas’ implementation of it. Should be a capable device.

Yes only thing is we will have to use external GPU over PCIe instead onboard as that would take a year or 2 to get support pushed upstream.

I hope arm will push gpu support themselve in the kernel and panfrost along with collabora team.

we will have to use external GPU over PCIe instead

What about AV1 decoder support? There no information on this conference, but AV1 had been shown on previous Rockchip roadmap early this year

Hi, I think we will find out all the comprehensive information when the chip itself is released.

What about AV1 decoder support?

On Wikipedia, in the pivot table AV1 is also listed for RK3588.

AOMedia Video 1 (AV1) is an open, royalty-free video coding format initially designed for video transmissions over the Internet. It was developed as a successor to VP9 by the Alliance for Open Media (AOMedia), a consortium founded in 2015 that includes semiconductor firms, video on demand providers, video content producers, software development companies and web browser vendors. The AV1 bitstream specification includes a reference video codec. In 2018 Facebook conducted testing that approxi Lik...

Finally there was a leaked geekbench for rk3588 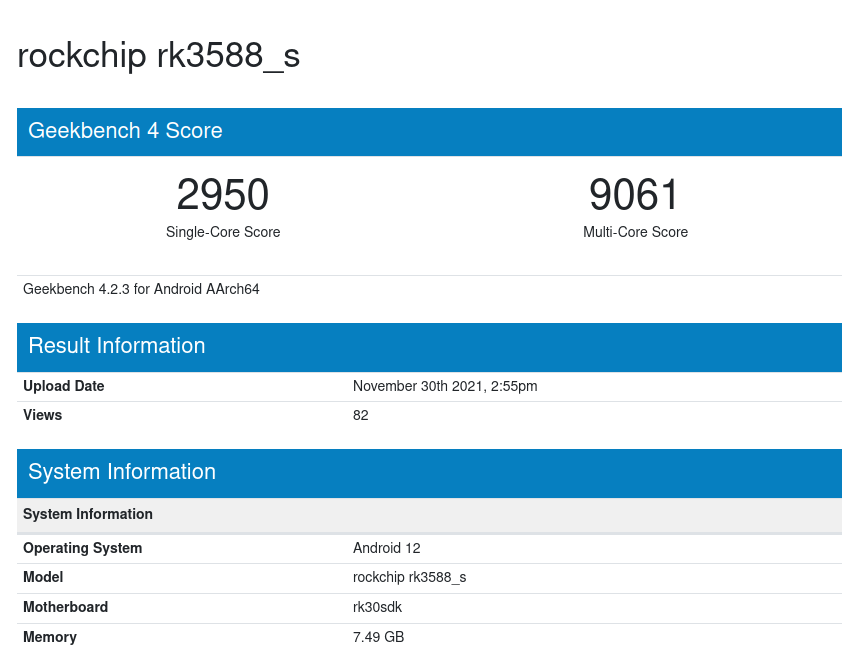 We have the first benchmarks for Rockchip RK3588 processor as an Android 12 device based on the SoC has just appeared on Geekbench.

It is double the performance of s922x

It going to be interesting new year.

the long awaited RK3588 has been release with a spec sheet 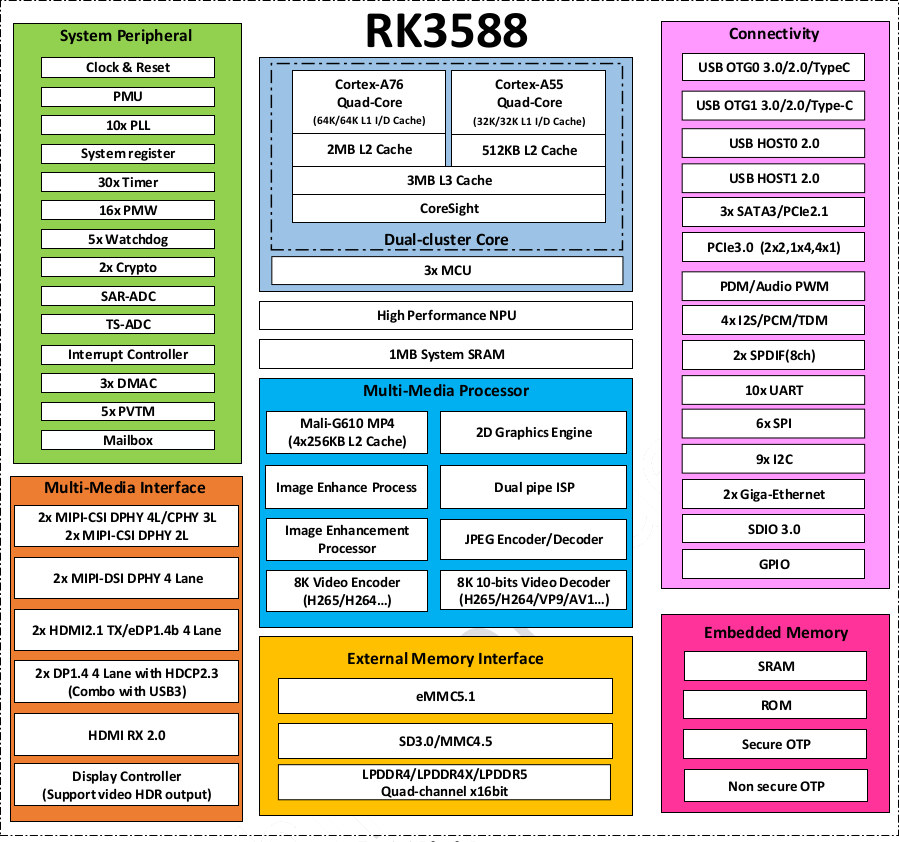 We had most Rockchip RK3588 specifications so far for the long-awaited Cortex-A76/Cortex-A55 processor, but at today's Rockchip Developer Conference 2021,

Hoping for khadas to release their timeline as soon as possible

Khadas will get prototypes soon I guess.

Hoping they will work on it.

Interesting soc but gpu support will take time while hopefully rk will officially work on vpu.