Sorry for waiting for so long, Here release the Android Nougat ROM

Will the Khadas remote work on this release? The 12 button remote with Khadas printed on it is the one that I own. I’m using balbes150’s LibreELEC and would like to know if the remote will work on it if I upgrade my VIM box to Nougat from Marshmallow. Thank you in advance.

—EDIT—
The Khadas remote works fine with LibreELEC-S905.aarch64-17.4_20170830-KVIM.img.gz on my memory card with this Nougat release on EMMC. In addition to it, my TV remote also works perfectly through HDMI-CEC.

The Khadas remote work on this ROM.
Thanks.

Is it possible to configure or turn off the fan with this Nougat build?

My fan is connected like in your cooling fan assembling guide. 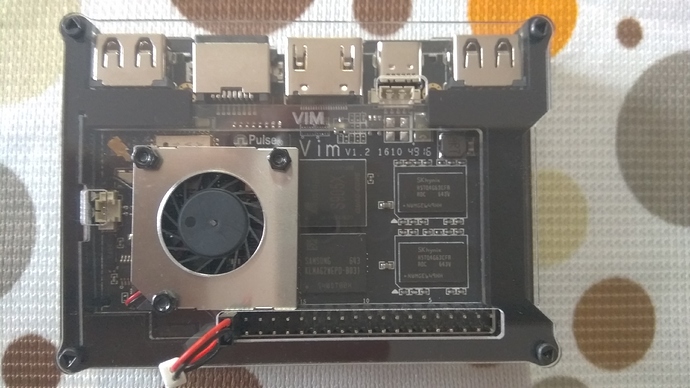 I would like to turn it off, it isn’t needed for Android, if i could at least lower the rpm-s, it would be great.

there is a fan control in settings but not sure if it works.

Didn’t even check in settings, will try later, thanks.

Hello, In the picture, the fan is wired to a GPIO fixed voltage pin and Ground. It is unlikely fan can be controlled from those GPIO pins.

VIM2 has a dedicated fan header and fan can be controlled thru settings, it works well.

I am not sure if fan speed or fan on/off can be controlled on the VIM. Not saying there is no way, but I don’t know how one would do it.

Can’t find it anywhere in the settings, i guess i’ll just disconnect the fan, it’s the easiest solution.

For VIM1 , in this connection, no adjustment of turns. Either disable completely from the connector or add a circuit variable resistor (which adjusts the volume on old TVs and radios) or to use controllers for fans on a PC.

p.s.
I already wrote, I have VIM1 connected 5 V fan to these contacts, it is almost inaudible during operation and its performance is enough for cooling under load.