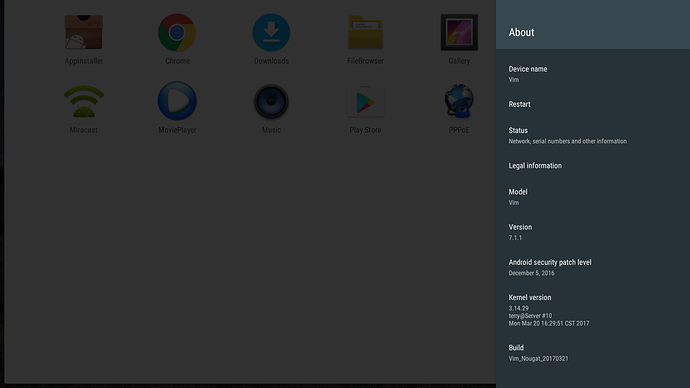 Congratulations on this release, i am now more than happy because i bought this device

It really looks like you weren’t lying when you talked about support for this device, although i did bought it because of Linux, i really appreciate this move, because most of these devices get abandoned soon.

I really wasn’t expecting Android 7.1, this device will now be useful for many years, as long as it works of course.

You now have one more serious buyer for Vim2, of course if the price isn’t too high, i am talking about S912, RK3399 will probably cost much more.

Uploading… (The network is not so good in China, it will take another 45 mins to finise

congrats, this is unusual and we appreciate it, thank you khadas!

Now i have, for the first time in my life, an up to date Android device, it isn’t a smartphone but it counts.

I did flash many custom roms, but this one is official, that is the difference, keep up the good work!

Still lots of work needed…
amcodec is gone for good… hmm maybe not that good now since the mediacodec implementation is still not that good…
Cpu usage 2 high even in idle, with usb stick connected.
Mem usage great

Still 2 many hangs, vim gets really hot…
Btw next rom you guys should rls a deodexed one and plz a upper and lower bars…

I just stumbled over a list of Android versions, mapped to Linux kernels.
But when I look at the pic, I can see a 3.14.x linux kernel… why is that?

Edit: this article mentioned that Amgloic started work on kernel 4.4 support in preparation for android 7.0. Doesn’t seem like they made it very far. Thankfully the linux-meson community is doing a fantastic job.

Yes, Amlogic is developing linux-4.4 for Android Nougat, but still not stable yet.

In this firmware u-boot with support for multi-boot or the same ?

p.s. It’s funny to read how many people believe in a miracle if they figure the kernel version change from 3 to 4 they will get the best system.

Thanks for the explanation

Linux 4.9.4 from Amlogic official is coming, check Amlogic openlinux website for the details.

Yes, the u-boot in current built is still stick to Amlogic official source code, and we are uploading Android Nougat repositories to Khadas Github, but have complete yet

Amlogic only open the download permission for their design house/companies.

We will upload it to Khadas Github then.

Not sure if your remark was directed at me, but no, I do not believe kernel 4.x = “best system”. I actually need something which is only available in the latest versions of the kernel (4.6+).

Do not pay attention, it was not written specifically for You.

there are also the beaglebones, which SOC is backed by TI

Hi, terry & Gouwa!
Great news!
Soon the VIM will come to me. Already 2.5 months have passed…

I will build the firmware for the CarPC community.

When will be uploaded the source codes to github and the instructions to them?