Will Khadas offer a Debian 64-bit image for the VIM4?

I’ve just placed my order for a VIM4, and would prefer to install Debian 64-bit Linux on it. Does anyone have an idea if this may be possible using the Khadas Linux drivers?

I find that the Ubuntu image for the VIM4 is not yet on-line for download here: https://docs.khadas.com/linux/firmware/vim4_ubuntu_firmware.html. So, this question may be a bit premature, but perhaps experienced Khadas users may have some opinions on porting Linux distros to Khadas hardware.

I have used Fenix to build Debian for VIM1 & VIM3. Might have to wait until they update Fenix to reflect VIM4 builds. Its pretty simple they did a good job with Fenix.

@LDighera We won’t release a Debian firmware, but you can still compile Debian 64Bit firmware via Fenix.

Thank you for sharing your experience porting Debian to Khadas iron. I have no familiarity with Fenix, and a quick purusal of their web site https://fenixlinux.com/distroshttps://sourceforge.net/projects/fenixlinux/ failed to provide information of ARM CPU support nor Debian. Perhaps you can provide a few Fenix URLs to get me started.

Perhaps you can provide a few Fenix URLs to get me started.

Fenix is an extremely powerful tool for developers. What Khadas has packaged up for us to use is pretty much a first in the industry.

Here is the git site: 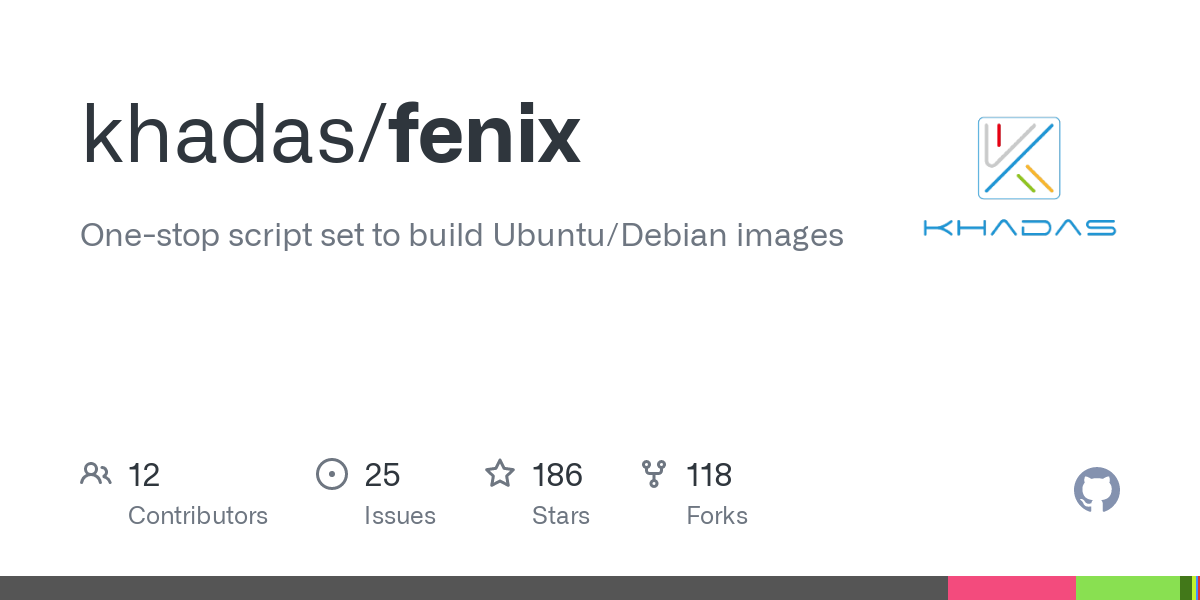 After it is installed

First config what you want, make sure you select compressed img option and USB install.

Here is the official information: 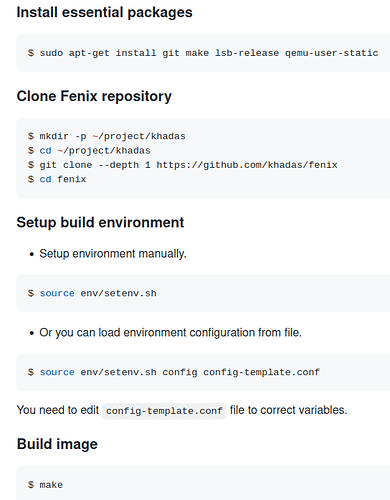 Thank you very much for your response.

I have found this https://www.debian.org/releases/stable/arm64/:

"This document contains installation instructions for the Debian GNU/Linux 11 system (codename “bullseye”), for the 64-bit ARM (“arm64”) architecture. It also contains pointers to more information and information on how to make the most of your new Debian system.

Can you provide a URL for Khadas Linux drivers for the VIM4?

I’m very much looking forward to working with the Khadas VIM4, and am particularly impressed with its low power consumption.

Thank you so very much for your kind and knowledgeable assistance. It is beyond what I expected. Very useful and appreciated.

I’ll give it a through read-through, and when my VIM4 arrives.

Can you provide a URL for Khadas Linux drivers for the VIM4?

No, pretty sure they are still testing and debugging them.

Going to Debian is on the table here and possibly a future potential important issue. So far it seems like Khadas are the only SBC builders that know how to make us happy with OS offerings.

Is Armbian a realistic option for building a Debian Bullseye package for the VIM4? https://github.com/armbian/build
https://forum.armbian.com/topic/20866-bullseye-for-khadas-vim4/

Thank you. I am grateful for your continued support in my pursuit of Debian Linux for the VIM4. Very much appreciated.

I posted a request for porting Debian to the VIM4 to the Debian ARM list server, and received this response:

Is there hope of seeing a port of Debian Bullseye 64-bit for the
Khadas VIM4 any time soon?

The Khadas VIM4 and the A311D2 SoC both don’t appear to be supported by
Linux mainline yet, I don’t see any reference to either in linux.git,
but there are references to the previous generation, Khadas VIM3, so
it is possible that someone will work on this.

Once support for the device is upstream, the support will enter Debian
unstable after the next Linux kernel release, then potentially some
build config changes will be needed to enable new drivers, then the
package will migrate to Debian testing, then Debian backports and then
you will be able to use the backport on Debian stable. Generally
support for newer SoCs does not get backported to older Linux kernel
versions such as the one in Debian bullseye, but a newer Linux kernel
version is added to bullseye-backports. This can take a long time.

Until then you can use whatever Linux kernel build supports the Khadas
VIM4 such as one from the vendor BSP or from Armbian, on plain Debian.

Depending on your use-cases you may need to also get updated packages for userspace drivers (such as GPU drivers) or firmware.

Hopefully, this will inspire the Debian team to consider an “official” porting effort.

@LDighera Thank you for your contribution to the Khadas community, if Debian officially supports it, we will cooperate

Thank you for your support of the possible porting of Debian Linux to VIM4 hardware.

In my pursuit of that goal, I have sent the following message to BayLibre

I was referred to you by Mr. Paul Wise pabs@debian.org as a possible source for porting 64-bit
Debian Linux to run on the Khadas VIM4 SBC.

If your firm has an interest in such a project, and your development team possesses the requisite
expertise, please provide an estimate of when such an effort might be expected to be completed, and
some idea of its cost.

I have no idea of the cost of such an effort, but in today’s era of croudfunding, surely there is a way to effect this. Paul Wise indicated “BayLibre Linux consulting company seem to be the main contributor to Amlogic/Khadas support in Linux.” Perhaps Khadas is able to provide some insight into BayLibre’s possible fee.

I am waiting on some kernel dev to look into A311D2 soon too. I did try to ping the lead developer at BayLibre and he responded that A311D2 is not a priority now, first they will upstream older chip and then look into A311D2 later.

Thank you for sharing your knowledge of this subject. Very much appreciated.

Was there any progress on this? I have got Debian 10 on the OOWOW carousel, but I would love to get Debian 11 on the platform.

I have installed HomeAssistant on Debian 10 and modified it so that HA doesnt complain about unsupported, but would like to have it native.

Kudos to the Khadas team and Community! … VIM4 is fantastic! I will be using these more in the future.