Does the VIM1 actually support HDCP, e.g. to play HDCP-protected content such as Netflix or Amazon Prime Video? It is the case according to its specifications, but I fear that this is more a matter of hardware capability than of final-product support. What I mean is that the S905X SoC clearly supports HDCP, but that the VIM1 may not support it despite this because there may be no HDCP keys installed to enable HDCP as it is possible that nobody paid a license to Digital Content Protection LLC. Actual HDCP support seems all the more unlikely on the VIM1 that it is an open platform, which might defeat the purpose of HDCP.

Hello and welcome to the forum.
Can you share a screenshot of where you se HDCP?

I couldn’t find it anywhere on the link you shared also open source hardwares will never get HDCP approval so maybe your confused with HDR or something?

I’m definitely not confused. Just let the page load, then press Ctrl+F to search for HDCP: 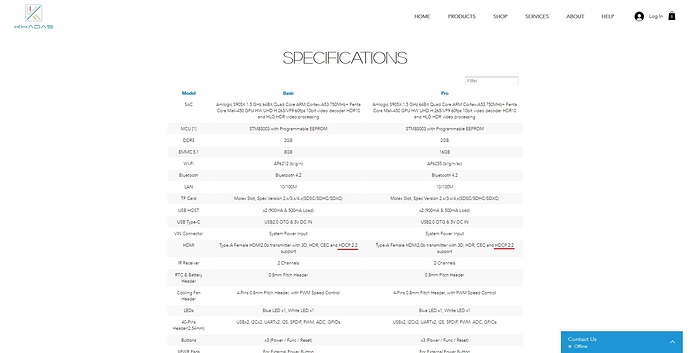 As I said, I agree that it is extremely unlikely that the VIM1 actually supports HDCP, which is why I was surprised to see it in the specifications and I think that these specifications are those of the S905X rather than those of the VIM1, but this page is misleading in this case. This needs to be clarified by someone at Khadas or by someone who has tested or investigated it on the VIM1.

Ok I read that and I see that HDCP is just an Hardware technology.

Maybe someone from Khadas can answer in a clear way as for me I think it is just a HDMI hardware feature and not the one you’re thinking it is.

The device won’t be able to play any DRM content with more than 480 or 720p depending on the platform as it doesn’t have Widevine L1 License.

That’s from my little understanding about DRM.

As documented in the datasheet of the S905X, this SoC supports HDCP. However, this is not enough to say that the VIM1 supports HDCP, because HDCP is not purely hardware: it requires at least a configuration element, namely the HDCP keys required to enable this feature. My question is not about what HDCP is, but whether or not it can be used on the VIM1, i.e. whether valid HDCP keys (from Khadas or Amlogic) are programmed on the VIM1.

@Terry will confirm again and response.

All recent Amlogic SoC hardware is HDCP capable and this is supported in the Amlogic BSP kernel if matched with OP-TEE secure-world boot firmware. None of the Khadas devices ship with that level of software support by default and the mainline Linux kernel (which users are increasingly using) does not have all the plumbing needed for HDCP within the Amlogic video drivers (current support is limited to some Intel chips). It’s not impossible for VIM devices to run the BSP kernel and add the missing bits, but the nature of the licensing involved with creating the OP-TEE firmware effectively requires a custom board for your application; it’s not something that can be done generically for all VIM boards.

I’ve been corrected by someone who knows more:

“HDCP doesn’t need any secure world set-up, but there’s not much point in implementing it without having access to DRM content. It can all be done without TEE. We were verifying HDCP stays working on a mainline kernel and it does (just poking regs); with the relevant HDCP licenses burned in.”

So HDCP itself only needs licenses in efuse, but for DRM content that requires e.g. device Widevine L1 certification you’re still headed down the secure world rabbit hole.

Good to know. Thanks for the update. And I suppose that there is no such license in the efuses of the VIM, right?

I’m not aware of anything but @Gouwa would confirm.