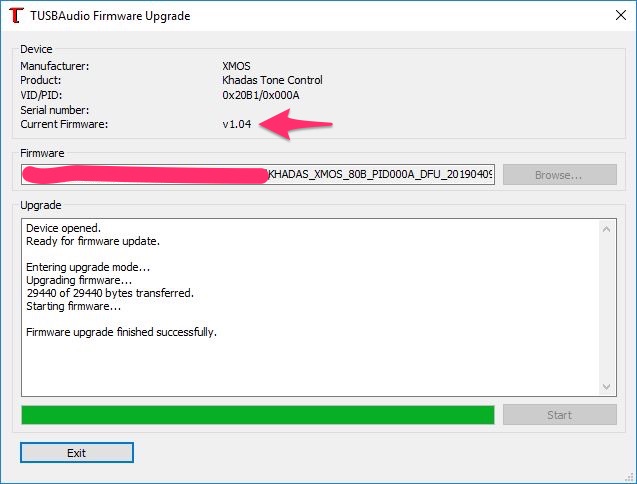 Note: After upgrading using the “EVAL drivers”, uninstall them and use your Windows 10 native USB-DAC driver, else you will hear a loud tone after sometime.

The update docs contains instruction to update via Mac. To confirm this is supported?

Well it works (most of the time), sometimes it doesn’t work via Mac, the XMOS updater is terrible. The worst error you’ll get is “unable to detect board”, which means you can’t brick your Tone Board using the Mac - but then you can’t update it either.

Updating via Ubuntu and Windows is more reliable, I just run a virtual machine of Ubuntu on the Mac, and connect the USB-DAC to it.

I get both on Mac and Ubuntu (terminal info included): could not find/open device

What am I overlooking?

wondering if anyone notice any difference after updating the FW to v1.04?

Please let me know your feedback

I just opened a new terminal and it worked. Looks like you can’t use the same terminal window that you used to install the tool. I’m guessing it’s a environment variable or something.

I tried toneboard-burn-tool with sudo and it worked

Same experience as Gytis. Without sudo on Mac and Ubuntu, I get the “Could not find/open device” error that PaulZH saw. With sudo, it works. The instructions for updating the firmware (https://docs.khadas.com/toneboard/HowtoUpgradeFirmware.html) should be updated accordingly.

Has anyone seen any benefit from firmware upgrade ?

Just wanted to say that the macOS updater seems to work fine, except that it seems to be missing an entry for PID = 0xa!

I added 0xa to the long list of if statements, and it worked fine!

Hi Everyone. I am usying Khadas Tone Board on Windows7. After updating firmware Tone1_Firmware_V2.00 KTB stopped working. Has changed the name to Tone1 and cannot work. TUSB Audio also cannot see the device that I can load previous firmware. Is there a way to reset KTD to origin firmware? Btw now KTD on windows7 do not work at all. On Win10 works, but also TUSB Audio do not see the device, that I could load previous firmware.
I would appreciate your help

Hi, just want to make update, maybe somebody will have the same issue. I missed info that there is new driver - Thesycon 4.82.0 and than it works

After upgrading firmware to version 2.0. your previous Thesycon Control Panel will not recognize the device. On Win10 you will have the sound, but on Win7 not. So, unistalling all previous drives and installing new 4.82.0 will help you.
But I wonder, now I have maximum 24mbit and 192khz. Previously on version 1.04 I had 32/192. I will go deeper with it, but maybe someone knows the solution?

Hi @Piotrek_Golas
Did you upgrade the Khadas USB Driver?

Yes, I have updated Khadas USB Driver. But on Windows7 24 bits is the max. On Win10 there is 32 bits available. I’ll still try something and keep you updated.

I reinstall Win10 to achieve 32 bits. Maybe new driver is not fully supporting old OS, such as WIN7