@Gouwa maybe you know what could be going on. I check with several people who have the exact same setup as I do and they get the option to set in Roon Native DSD. I have 7 endpoints, with 7 different DACs and all show Native DSD except the Tone 2 Pro. Everything else works great. MQA files are being decoded perfectly fine. It’s just DSD being converted to PCM.

This one example of another user with the same setting that has the Native DSD option. 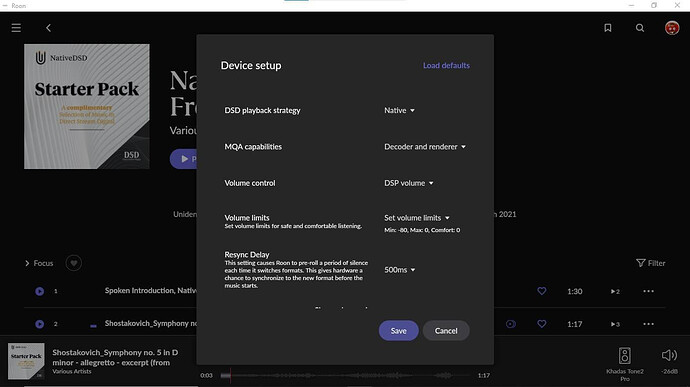 Furthermore, I tried connecting to my Mac, and Allo USBridge, Pi4 and Pi3 and in none of these gives me the option to select Native DSD.

OK, thought Roon core was on a Windows NUC, and that it would use the choice on this Roon device to send it on anything, even a Rasberry Pi, and that only if the Raspberry Pi was the Roon Core, it would require ALSA, which is not the case at all.

but through a Raspberry Pi and have the same exact issue, It only lights as PCM 44./48K. I’ve tried MQA files with different resolutions,

Furthermore, it is not paying Native DSD

To support Native DSD on Linux for both ARM SBC and X86 PC, need to check the patches from here.

BTW, may I know which kernel version your Rpi device is running, as the latest stable kernel should already with the patch applied for common Linux kernel on both ARM SBC and X86 PC.

Finally, after wracking my head for so long, I’ve figured it out thanks to @Grooved 's reply on another thread.

IMPORTANT THING TO CHECK : on Tidal, some album have different version, even several MQA version, with some having both MQA 24/96 and MQA 16/48… you wont see it in the Audio Dashboard, but from the led location only, or from a software like Roon or others, but not from the Tidal app.

There’s nothing wrong with Tidal nor my Tone 2. It’s just that some Tidal MQA tracks are 16 bits/48kHz. I checked this by skipping through an MQA playlist while looking at the LED. Some tracks give 2 LED bars because it’s 24/98, some only one bar since it’s 16/48.