Why does the Khadas-provided 5.5 mainline kernel not have the panfrost driver for the Mali-G52MP4 GPU?

Yes. It is not integrated now. We plan to integrate the open source GPU driver and mesa on Ubuntu 20.04.

Do you have an ETA on the release for this? (I would also be willing to test.)

You want to test it on VIM3? Seems panfrost not support VIM3 yet, but we will send the samples to the developers this mounth.

Why does the Khadas-provided 5.5 mainline kernel not have the panfrost driver for the Mali-G52MP4 GPU?

^ because the driver doesn’t exist. Panfrost currently supports Mali Midgard (T820/VIM2) only. Mali Bifrost support (G52/VIM3 and G31/VIM3L) will come in the future; not in time for Ubuntu 20.04.

Despite claims of current support, checking the driver exposes that while there is some early code for Gxx, the driver won’t actually attempt to attach to them, indeed actively supporting only the Txxx series. My bad.

The panfrost devs turned their attentions towards Bifrost only in the last week or so so progress will take a while. AFAIK none of them have test boards yet (K will ship some, but not sure if that’s been done). Once they get hardware I’d expect things to crack on

Definitely looking forward to it, for sure. I’ve got a Rock Pi 4 and the Mali-T860 it has is pretty impressive, and the G52 is supposed to be a step up on it, especially coupled with the VIM3’s quad A73s.

Definitely looking forward to it, for sure. I’ve got a Rock Pi 4 and the Mali-T860 it has is pretty impressive, and the G52 is supposed to be a step up on it, especially coupled with the VIM3’s quad A73s

Even if the panfrost team add bitfrost support to kernel, this will only support hardware acc for desktop environment if the libraries are rebuilt using the gles to use panfrost. Next panfrost will not do anything with Video Playback, so what is the plan on vdec encoder and decoder codes?

I have Pinebook Pro which is Mali-T860 which works so smooth with the latest panfrost and the Mesa-20, We have started using qt-base with GLES and compositor and its a perfect working Laptop. BTW panfrost have Open GL ES 3.0 Support recently added

The vdec drivers for H264/VP9 have been reworked and merged for Linux 5.7 … Some additional work for H264 on SM1 hardware and HEVC are next up. I’m not aware of any effort on older codecs like MPEG2 and MPEG4 right now as even lowly S905X can software decode 1080p without problems. Older vdec code for them that could be reworked for API compliance exists, but I don’t see it being a priority on anyone’s to-do list any time soon.

NB: The vdec drivers are only half the story… player apps like ffmpeg/gstreamer/mpv still need to be revised around the updated APIs too. Rockchip (and Allwinner which shares the same stateless API) are currently ahead here.

Hi @narmstrong
I see you’re back to the forum, would like to ask you if you have been working in vpu drivers and codec for mainline kernel for vim1, vim2 and vim3?

Also do you plan to add ts050 touch screen drivers anytime in future?
Thanks

For the MIPI DSI touchscreen, we received some ts050 samples from Khadas (thanks @Gouwa !) and we will try to add support for it when we have some bandwidth

For the MIPI DSI touchscreen, we received some ts050 samples from Khadas (thanks @Gouwa !) and we will try to add support for it when we have some bandwidth

This is good news. Once you can get ts050 drivers to work on mainline we can get a plasma-mobile image for vim3 with touch and it should be the best Linux os for touch screen.

Ive tried lima with Wayland but never worked for me. We have been using lima for a64 with mali450 on plasma-mobile and never had any issues, lima is quite matured but idk why I was not able to make use of it in vim1.

For vim2 i am waiting for khadas @Gouwa to send me vim2 sample so i can test panfrost as we have been using Manjaro kde with panfrost and open gles2 and its quite stable as a normal desktop on pinebook pro which uses the same mali gpu.

On vim3 i have been able to make use of llvmpipe for ui without the need of fbturbo video driver. It works quite smooth and with mesa 20 git we have open gles3 support also.

Thanks for all your work. Do you have any timeline for ts050 driver to be ported to mainline?

Lima is run on the Mesa dEQP ci, and looks stable. 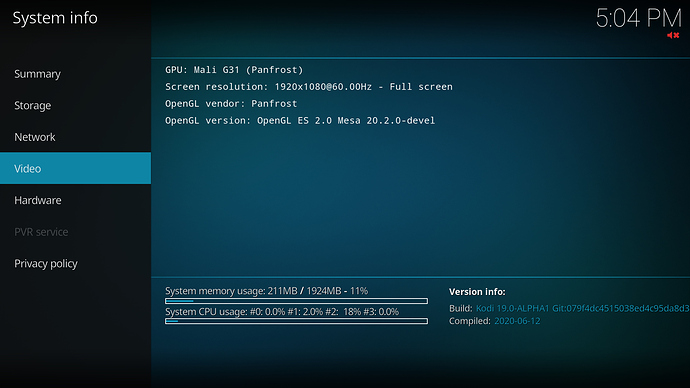 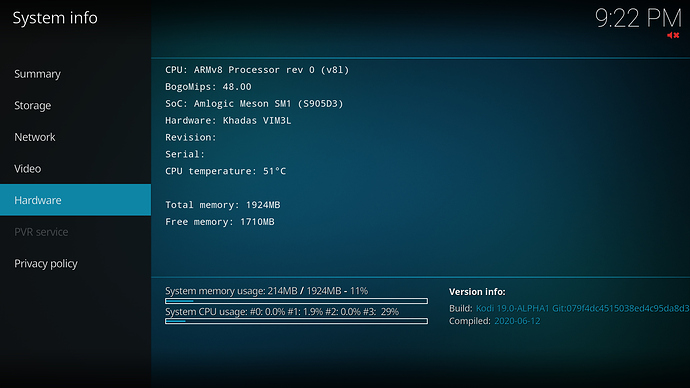 very nice ! so when will be possible watch movie in LE?

Panfrost has nothing to do with being able to watch movies, that’s all about the hardware decoder. You can watch movies in LE as long as they aren’t 4K HEVC (VIM3/3L can s/w decode HEVC at 1080p) and as long as you don’t skip (seek) as nobody figured out how to implement flush with the V4L2 stateful code-path yet (Raspberry Pi has the same issue). NB: G52 support in panfrost has some issues likely due to some undiscovered difference in the GPUs.