Installing an ssd on edge-v

With the m2x extension, the edge-v can have an m.2 nvme ssd. When I plug it in I get a notification saying it’s not supported, and to click to set up in supported format, but when I click, nothing happens. Settings also crashes when I go to the storage or open the files explorer. Looking for help. I’m using the edge-v pro with android 10

@goenjoy how do I format it if it keeps crashing?

I use an external USB adapter to format it on a big Ubuntu box then remove it and attach to the PCIe bus. Make sure you have a heat sink on the NVMe.

@foxsquirrel how do i do that?

Use a NVMe to usb adapter.
Here it is with a heatsink attached.
Make a power connector from this

Just cut it in half and solder on some wires. Both red wires soldered together and do the same with the black wires.
NVMe draws more power than a SATA SSD so run it on a stiff power supply.

You can also boot from it using USB not PCIe. Suggest running the DC power cord to the connector on the board so you will not have any problems with it dropping out under load. USB 3 port slows it down to around 320 Mbs so you don’t gain any thing with it on USB, in that case a SATA SSD is a much better solution.

With it on PCIe bus it runs around 520 Mbs sustained. You will need to turn on PCIe.

A SSD drive with a startech USB3S2SAT3CB usb to sata adapter is around 320 Mbs sustained transfer rate. Unless you really need the speed a SSD on the USB 3 port is the best solution. Make sure the PCIe is turned off if you do use the USB 3 port because it will slow you down considerably.

Netac and Western Digital Blue SSD have been tested and are very stable and good performers.

With the adapter on just use the USB port on a big box and “Disks” to format it.
If you don’t have it installed 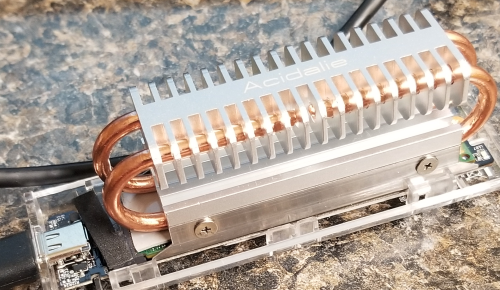 It was on the VIM3 with M2X extension. We have several different Khadas boards being evaluated so I will check that later and get back to you regarding the EDGE V board.

Unplug and remove the NVMe from the USB adapter and it will fit.