Hi all, this may be a stupid question, please forgive me in advance, still delving deeper into the hobby.

I’ve read a few reviews that are stating the frequency response of the Tone 2 is only up to 20kHz in regards to DAC and AMP measurements. Wouldn’t this defeat the purpose of having high sample rate decoding? Since it will cut off at 20kHz and all.

If I’m ignorant regarding conversions, decoding, etc., please enlighten me

20Hz-20kHz is considered the normal range of human hearing. Little can be detected by humans over 20,000Hz. If one is over forty years of age, dramatic high frequency reduction occurs to human ears. Some humans can, but 20Hz-20kHz is typically how audio gear is rated, at least to show the flatness of the curve in this range. Ideally, 20-20kHz would show as a flat curve from one end to the other. This is rarely acheived, so often you will see it expressed something like 20-20kHz, +/-3dB. All devices can produce sound outside of this range, but many frequencies outside will be down greater than 3dB. Khadas shows the T2P gets close to flat in this range, Frequency Response, 20Hz～20KHz, ±0.15dB.
For perspective and in amplifier’s terms, a 3dB increase in volume requires a doubling of amplifier power. If a speaker’s efficiency is rated as 85dB@1W at 1 meter, in order to get 88dB from that speaker it would require 2 watts, 91dB requires 4W, 94dB requires 8 watts, 97dB requires 16 watts, 100dB requires 32 watts etc. So something down more than 3dB becomes less audible compared to signals within the 3dB.

Thanks for the thorough reply, I really appreciate it. I had figured it was to do with frequency response graphs and the curvature(s). Do you happen to know if there are any measurements/data for the Tone 2 Pro beyond 20kHz? More so just curious, I am guessing it would look similar to a graph like this 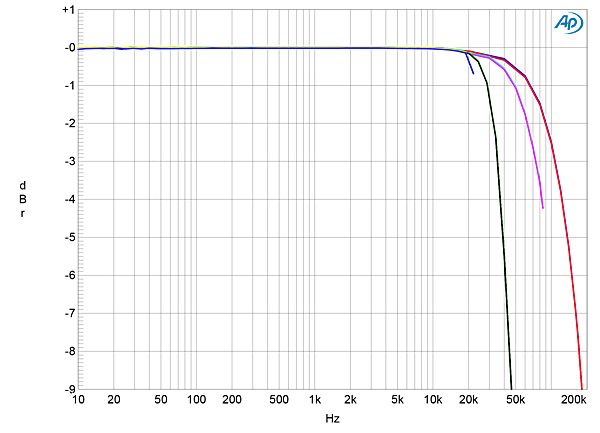 yup, should look a lot more like that, as @RDFTKV said, it only matters in the 20 - 20KHz region, but some also consider the 0 - 20Hz region to be important because of the way the human ear perceives sound, iirc audiophiles also consider infrasonic sound as something you “feel” and not just “hear”