Eth0 not working under android [SOLVED]

Hello, I am trying to get ethernet to work on the VIM3. I am testing with VIM3_Pie_V210128 and also have tried building my own android. Using adb I have tried bringing the interface up but it always says “DOWN”.

Here is some dmesg output that seems relevant:

Edit: I installed a linux image and eth0 works properly and I am able to ping so it is not a hardware issue.

Using krescue eth0 does come “UP” although I couldn’t get ping to work. I also noticed it uses meson8b-dwmac instead of meson6-dwmac in dmesg output.

Hi @youri
It shouldn’t be not work with Android in your case your device works on Linux.

Can you take another try with another version Android image?

Thank you for the response. It looks like this was user error.

I tried an older image and then thought to try turning off “ethernet port” in the settings - after turning it off and rebooting the ethernet port is working. It looks like maybe that setting turns off the m2x which makes the regular port work- and I thought it was for the onboard port.

Is there a setting I can make in our android build to make this turned off by default?

You can turn off the M2X function on the Settings 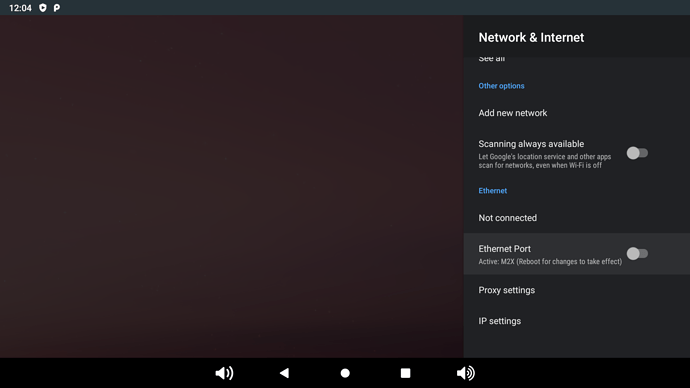 Thank you. I got this far. Is there a file I can change in my khadas android build to make this the default? I am trying to make a default build to flash which turns off functionality I am not using and preinstalls some applications.

Thank you! That will work for me.