I am attempting to flash the Ubuntu eMMC image to my EDGE-V board (it still has the factory Android image) but cannot get it connected to my PC. The PC is running Windows 10. I have tried both DriverAssistant 4.6 and 4.8. I am certain I am using the correct USB C port and I have tried both the Key sequence and the the TST sequence. I can get the board to appear in Android recovery mode as well as flashing the Blue LED but in all cases Windows 10 reports that the USB device failed because the descriptor request failed. Specifically:

Any help would be appreciated.

@jwoolston Maybe you can uninstall the driver and install again . And I think you need to check you whether the data line has the function of data transmission .

@Frank, thanks for the response. I have tried uninstalling/reinstalling several times, even with reboots. If you are referring to the USB cable, it is one which I routinely use to communicate with Android devices via ADB so I know the data lines are connected.

@goenjoy Following the steps at the link you provided result in identical behavior.

The problem must be on your Windows 10 system. Would you like to upgrade your operating system?

I have all available updates. The hardware is less than 6 months old. Literally every other USB driver for assorted android devices works. Ubuntu 19 also reports the device descriptor fetch fails as does Android (attempted to verify usb descriptor only). 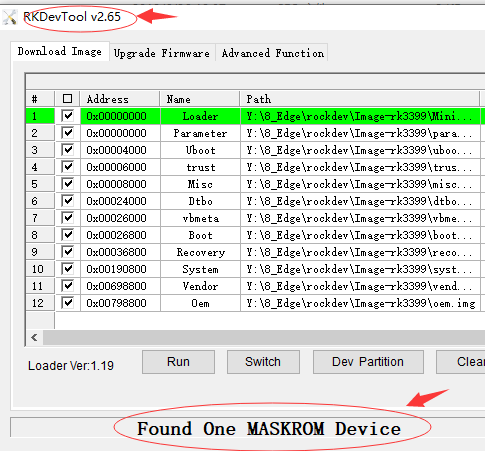 I see the blue led flash for a few seconds (inconsistent rate, I assume that’s fine).

Same result as before, device descriptor fails. Note that according to windows this could be a driver failure or a device failure. Also note that the board boots its factory Android image from the eMMC drive just fine if I don’t enter TST/Maskrom/recovery modes.

I tried the above procedure with power from the dedicated USB-C PD port and USB-C data from the data port as well as power and data both from the USD-C data port with identical results.

As annoying as it would be, is it possible for me to install the Ubuntu image to eMMC from an SD card (so that I do not have to run the image from the SD card)?

Can you try another computer?

I had the same problem. Could not get a Windows 10 based system to see the Edge-V. I tried multiple notebooks with same results. I found that a Windows 7 system worked, no problems. I did not troubleshoot any further or try to resolve the Windows 10 issue.

I have an old windows 7 system I can try. Someone should really look at updating drivers if thats the case as all my systems have moved past Ubuntu 16/18 and Windows 7 is nearly impossible to come by these days.

No difference I’m afraid. I have yet to try the suggested Windows 7 platform.

@goenjoy I tried a different (older) machine with Ubuntu 18 and had the same problem. The dmesg log on device plug is attached:

I had tried those this morning (9 hours ago). There was no difference.

I am deeply concerned about why linux is unable to even get a valid descriptor from the device. Getting a USB descriptor is part of the host-device enumeration process and completely separate from any driver or knowledge of how to talk to a device. The fact that the linux USB stack is reporting that the device descriptor reads are failing suggests something wrong with the device.

This was tested and it failed in the same way.

We have another Khadas EdgeV that does not have this issue.

This leads us to believe there is an issue in the Edge V device. What is the RMA process we need to follow for this issue?