Driver or FW need to be fix

Whenever change mode in software, the Tone board need to be disconnected and reconnected to get it working otherwise, a loud beep sound every 10-20 seconds.

I don’t have problem with other DACs except this TB

Like change the device will cause the TB not function properly 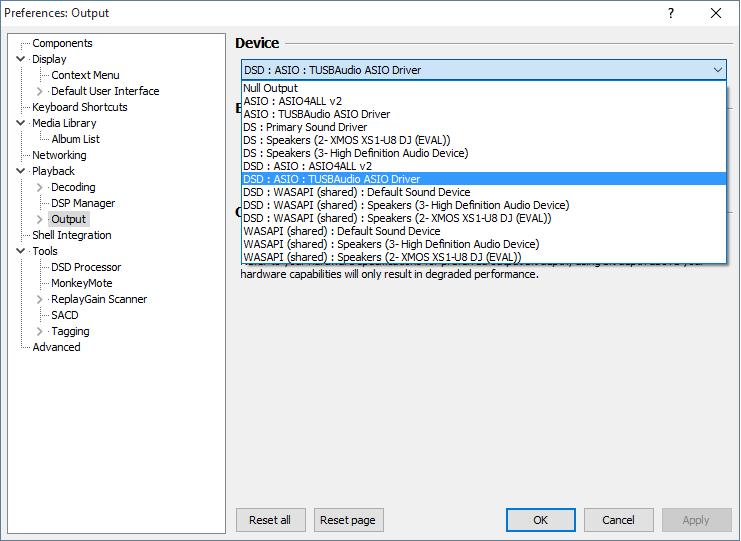 Testing again last night with FW1226, there was a beep sound randomly. Whenever the beep sound occurs, then it keeps going on every 50-80 seconds. which you have to disconnect the USB cable then work after. Happened like 6 times during 4 hours playing. I think there is a bug on the FW.

Does anyone have this problem? I thought I saw someone mention that before.

I found out it’s not a FW but the driver.

Hi there! The tone is generated 1 hour of connected TB to usb, for every 300 seconds or 5 minutes. It is the drivers that are Evaluation version from Thesycon. The last fully compatible and bought drivers from Khadas that are registered to Pid and Vid of their product were 2.24. Although Thesycon has released now 4.54 version of drivers, Khadas has not requested the USB drivers for their TB. So every other drivers that v2.24 will have this tone.

I hope Khadas will license some of the newly veesion driversbecause they have a much more better quality.

Actually I got its working now.

If anyone runs into problem, make sure to uninstall the Eval driver and check the delete box on Windows OS, then run Setup from the driver below, it will have everything even DSD. Do not run Add driver from folder.

That’s it! We are still waiting Khadas for never version, you can clearly hear how much difference is between 2.24 and 4.xx version

Tone Board v1.02 Firmware is working for all the driver in windows.Before it worked with WASAPI (Shared) only now it works with the regular WASAPI… Thank you

You’re welcome @Alashikita. Glad to hear that the v1.02 driver is working out well for you.

Thanks to @Terry for all the hard work!

Hello!
I have to confirm Alashikita’s insights here:
with Thesycon-Stereo-USB-Audio-Driver-v224 only PCM output works; if the player attempts DSD stream it ends up with an ‘unsupported format’ error, although dsd is listed when driver is queried for possibilities;

XMOS_TUSBAudio_eval_v4.11.0_setup works properly in that regard allowing direct DSD playback but after some time (in around an hour after device start) it starts giving noise bursts, perhaps as it is an evaluation version.

I tried it with BugHead players at 2.8 MHz via ASIO.

Seems like Toneboard in its retail form can’t do DSD direct… unless we get a ‘legal’ updated driver. Many other players mangle the signal to PCM and so they work, yet sound not optimal.

to reproduce:
get the player here [for x64 windows and recent cpus]: http://www.mics.ne.jp/~coolverse/package_20200509_Bughead_x64.zip
extract, navigate to Bug head 11.93 x64 folder and run StartupB.exe
choose your asio driver (“get asio device name” to see if correct driver selected)
“start” the player and open some dff / dsf file - it won’t play with 224 driver, but would with eval 4.11 one.
the drivers as provided by Khadas are here: https://dl.khadas.com/Firmware/ToneBoard/Driver/

This is the only higher version driver I’ve found to work with the KTB. Should do the trick!

thanks! it indeed works but has no support for direct dsd whatsoever - that is, the driver even doesn’t advertise dsd rates…
Although Thesycon-Stereo-USB-Audio-Driver-v224 does advertise dsd rates it doesn’t actually switch to them - player screams ‘unsupported rate’, and XMOS_TUSBAudio_eval_v4.11.0_setup does advertise them too AND players work with them, and also these rates are indicated on tusb audio panel when it plays… but it has noise bursts as it’s an EVAL driver

I tried Bug Head with the v4.13 drivers and I was able to see advertised rates up to 756kHz. The problem with Bug Head was it refused to play DSD files above that rate but I had no problems using foobar2000 with the Super Audio CD Decoder as it downsampled the files.

This is a nice player I found. I got tired of the plugins for foobar.
Wave Pcm Upconvert Player

I use the driver here XMOS-TUSBAudio-EVAL-V4.11.0-Setup.zip and found the same problem, will this be fixed?

just uninstall it , and let windows install default Microsoft driver for you

hi Akbaar, there is no default MS driver for this, that’s why they paid Thesycon for one, but the bundled one (version 224) lacks direct dsd support, yet there is newer version 4.11 which does it all, but makes noises every now and then as it’s not licenced.
Perhaps no one would pay again for the new driver to be used on old board but as they already paid for initial one, maybe Thesycon could offer that upgrade at reasonable conditions…

you mean that XMOS driver? it doesn’t pass DSD at all

doesn’t pass dsd? I see dsd:asio option in foobar2000 after installed it, and can play dsd file by foobar.