I may be mistaken, but attempting to locate Armbian images for the VIM3 seems to result in long forum discussion threads, concerned with maintainer issues and preferences, or provide outdated links that lack description of their contents. I hope to somewhat remedy this situation! To that end, I am supplying links and guidance to my new Armbian desktop image for VIM3 Pro, with an Ubuntu Focal base, 64-bit kernel and 32-bit, armhf packages.

I’d like to thank the individual efforts by @Spikerguy and help from @jtremblant for my earlier TwisterOS image, which provided many of the configurations to make this functional. Additional credit goes to lanefu, a contributor on the Armbian forums, for his valuable information on the Armbian firstboot mechanisms. 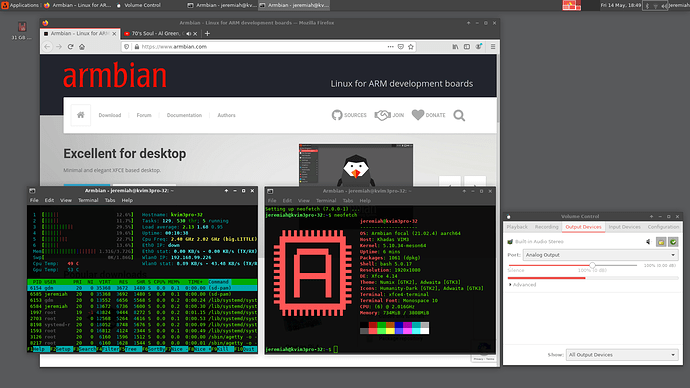 Description:
This is a clean system Image of Armbian 21.02.3, derived from a 32-bit filesystem for XT-Q8L-V10 TV Boxes, and the Meson64 current Armbian Linux kernel packages, prepared for the Khadas VIM3 SBC. Selective configuration items are derived from the Khadas Fenix build tool, tested to interoperate with Armbian.

The image is tuned for Amlogic A311D SOC, including support for HDMI audio output and the Khadas cooling-fan implementation, with a minimum of changes to installed software baselines.

Compatibility:
The image includes a mainline uBoot, prepared with the Khadas Fenix tools specifically for VIM3.

The 32-bit user space and apt/dpkg environment is convenient for compatibility with the wide availability of binary packages, flatpak, snaps, and app image packaged software distributed in armhf/arm7 executable format, for the Raspberry Pi SBC.

This Armbian image is partitioned with an MBR as a single EXT4 root FS, and 8192 beginning sectors of unpartitioned space for the uBoot loader. This image layout is not compatible with the Khadas kRescue installer or Amlogic USB Tool, and may not be fully compatible with imaging tools intended for use with Raspberry Pi SBCs.

NOTE: One significant change from the standard Armbian desktop images is the substitution of lxdm for LightDM as the display manager, as the LightDM 32-bit packages are cause of inconsistent graphics problems for desktop sessions on the VIM3. Some hacks were made to scripted functions in /lib/armbian/ for this to work.

Compatible installation methods are described below.

The image is ready-to-write, for SD-card or USB media, providing a live, running system. This is dependent on having a multi-boot capable uBoot from Khadas is present on the VIM3 eMMC, or that the eMMC is blank. uBoot may be current and capable on your VIM3.

Begin by download the image.xz file and corresponding .md5 files for validation from the Archive.org links:

Downloaded images may be verified with the hash in the provided .md5 file

Imaging:
Armbian provide guidance on transferring the downloaded image.xz to an SD card. You may already have a preferred method. During testing, all of my images were transferred to removable media with the standard Gnome Disks utility, included with many Linux distributions.
https://docs.armbian.com/User-Guide_Getting-Started/#how-to-prepare-a-sd-card

There are several images that are designed to run from a SD Card or Thumbdrive (U-Disk) and are compatible with VIMs. For example: Armbian with Debian / Ubuntu CoreELEC LibreELEC Manjaro Volumio Khad

Booting:
At this point, you should have an SD card or USB flash drive, that inserted in your VIM3, will boot Armbian into “first boot” setup when powered on.

If booting is not successful from your external media after following Armbian and Khadas guidance, it’s likely that your VIM3 has an incompatible uBoot on the built-in eMMC. This can be updated.
Khadas offer a guide to install the latest uBoot with their “krescue” recovery tool:

Logging in:
On successful booting, Armbian will begin several one-time tasks, including expansion of the root filesystem for all available space on the installed target media, and creation of a new user account. This is expected to take several minutes before settling, so be patient and don’t interrupt the process.

ROOT PASSWORD: 1234 (Changed on first boot, this is the Armbian standard configuration)

After successfully booting and initially configuring Armbian on your VIM3, the system can be transferred to the onboard 32GB eMMC storage from this running SD or USB image. Transfer of the system from SD/USB media (mmcblk1 / sda) to the VIM3 eMMC (mmcblk2) has ben tested, through use of the Armbian “nand-sata-install” tool, provided in the image.
https://docs.armbian.com/User-Guide_Getting-Started/#how-to-install-to-emmc-nand-sata-usb

UPDATE:
Announcement on the Armbian Forums:

I just released Armbian Focal Desktop MAINLINE images for Khadas VIM3 Pro. These are individually, pure arm64 and hybrid arm64/armhf variations. Thanks go to @lanefu for key pointers in understanding how to re-arm the firstboot and firstboot-config...

Nice one. Will give it a try in a few days…

I know you were asking about this, Yasir, and I hinted about working on this a month ago. Your posts were among those that prompted me to make an effort. I hope it works for you, and look forward to your thoughts.

I am giving every OS on vim3 a try to find out what works for me the best. Although I’m pretty satisfied with manjaro as of now, but I’ve learned in Linux that you can always find something better if you look hard enough.

Software availability is pretty much ok on manjaro and Ubuntu but the actual speed, experience, bugs and crashes are what differ and make or break your choice… Let’s hope this goes well, I tried the twister os for few days but it was too much bloated with stuff I never wanted to use, specially so many games and emulators and such
Hoping armbian will be much cleaner and faster, have heard good things about it…

The Manjaro team do good kernel work, and they strive for desktop fit-and-finish. The Armbian teams are very focused on arm, and keep a desktop quite workable.

For me, it is a matter of configuration, packaging and operations style. I have been primarily in a Debian derived world since 2.0 Hamm release, in the mid '90’s.

One possibility for a future release in my series is a set of .deb packages that install the TwisterOS native default theme, and package that team’s MesaGL panfrost support, etc.