Again, I’d like to thank the individual efforts by @Spikerguy and help from @jtremblant for my earlier TwisterOS image, which provided many of the configurations to make this functional. Additional credit goes to lanefu, a contributor on the Armbian forums, for his valuable information on the Armbian firstboot mechanisms.

Please feel free to offer input and feedback for possible improvements, and to use this as a possible basis for your own unofficial community efforts. 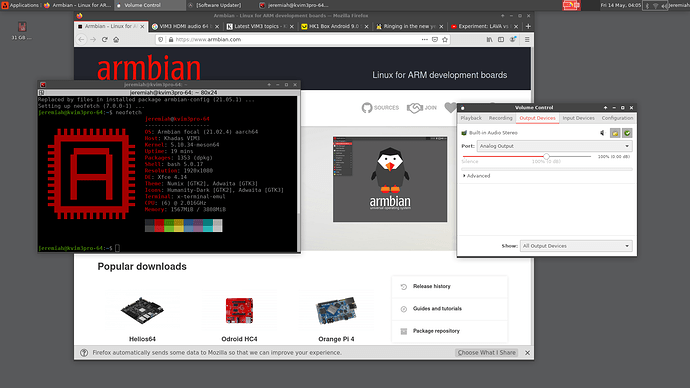 This is a clean system Image of Armbian 21.02.3, derived from the Armbian supported image for the ODroid N2+ SBC, using the Meson64 current Armbian Linux kernel images, prepared for the Khadas VIM3 SBC. Selective configuration items are derived from the Khadas Fenix build tool, tested to interoperate with Armbian.

The image is tuned for Amlogic A311D SOC, including support for the native G12 audio device, NOW WITH HDMI audio output, and the Khadas cooling-fan implementation, with a minimum of changes to installed software baselines.

This is a fully native ARM64 image, with the inclusion of Linux headers and C compiler environment. It is suited to building custom kernel modules, etc. for use in the Armbian image for Khadas VIM3 that I provided with a 32-bit package environment.

Compatibility:
The image includes a mainline uBoot, prepared with the Khadas Fenix tools specifically for VIM3.

This Armbian image is partitioned with an MBR as a single EXT4 root FS, and 8192 beginning sectors of unpartitioned space for the uBoot loader. This image layout is not compatible with the Khadas kRescue installer or Amlogic USB Tool, and may not be fully compatible with imaging tools intended for use with Raspberry Pi SBCs.

Compatible installation methods are described below.

The image is ready-to-write, for SD-card or USB media, providing a live, running system. This is dependent on having a multi-boot capable uBoot from Khadas is present on the VIM3 eMMC, or that the eMMC is blank. uBoot may be current and capable on your VIM3.

Begin by download the image.xz file and corresponding .md5 files for validation from the Archive.org links:

Downloaded images may be verified with the hash in the provided .md5 file

Imaging:
Armbian provide guidance on transferring the downloaded image.xz to an SD card. You may already have a preferred method. During testing, all of my images were transferred to removable media with the standard Gnome Disks utility, included with many Linux distributions.
https://docs.armbian.com/User-Guide_Getting-Started/#how-to-prepare-a-sd-card

There are several images that are designed to run from a SD Card or Thumbdrive (U-Disk) and are compatible with VIMs. For example: Armbian with Debian / Ubuntu CoreELEC LibreELEC Manjaro Volumio Khad

Booting:
At this point, you should have an SD card or USB flash drive, that inserted in your VIM3, will boot Armbian into “first boot” setup when powered on.

If booting is not successful from your external media after following Armbian and Khadas guidance, it’s likely that your VIM3 has an incompatible uBoot on the built-in eMMC. This can be updated.
Khadas offer a guide to install the latest uBoot with their “krescue” recovery tool:

Logging in:
On successful booting, Armbian will begin several one-time tasks, including expansion of the root filesystem for all available space on the installed target media, and creation of a new user account. This is expected to take several minutes before settling, so be patient and don’t interrupt the process.

ROOT PASSWORD: 1234 (Changed on first boot, this is the Armbian standard configuration)

After successfully booting and initially configuring Armbian on your VIM3, the system can be transferred to the onboard 32GB eMMC storage from this running SD or USB image. Transfer of the system from SD/USB media (mmcblk1 / sda) to the VIM3 eMMC (mmcblk2) has ben tested, through use of the Armbian “nand-sata-install” tool, provided in the image.
https://docs.armbian.com/User-Guide_Getting-Started/#how-to-install-to-emmc-nand-sata-usb

UPDATE:
Announcement on the Armbian Forums:

I just released Armbian Focal Desktop MAINLINE images for Khadas VIM3 Pro. These are individually, pure arm64 and hybrid arm64/armhf variations. Thanks go to @lanefu for key pointers in understanding how to re-arm the firstboot and firstboot-config...

Heads up! @jtremblant of the TwisterOS project, and a great systems guy, just informed me that HDMI audio output now works out-of-the-box for pure arm64 builds!
This was not true of earlier test builds. I suspect that I did not track a change, copying /var/lib/alsa/asound.state from my armhf build. These correct settings for ALSA mixer seem to be a likely solution.

Users of Fenix Ubuntu on VIM3 may want to verify if this solves audio issues, along with my other configuration details found here:

The Twister OS teams ported the system from RaspberryPI OS to Armbian, for broad support of ARM platforms, with a principal focus on Rockchip SoC boards. jtremblant, salva and Dangeruss26 on the Twister OS Armbian Discord channel have done a great job, creating a best-performing configuration of Panfrost for the Mali GPUs. I was able to get this running with full graphics acceleration and networking running on the VIM3 with minimal effort, which surprised the Twister OS Team. They encouraged me…

Excellent job with Community Armbian Image here. I guess now have a perfect excuse to get another Vim3 Pro to have a dedicated Vim3 for each OS, that will make it easier to “track” both developments simultaneously.

I wish Vim3 was less expensive and have a larger eMMC storage option available(128Gb) or a removable eMMC slot.

Thanks for the boost, man.

I did 100% of the imaging work for this with my VIM3 TwisterOS installation, and included tools. xz isn’t the fastest, and you can kill it by piling on threads!

It’s great though, for dropping into a simple loop device for quick file changes, or a fully operating chroot to manage packages. Scrubbing histories, logs with identifying information and authentication artifacts is easier this way too - without trips back and forth between the board and an Intel workstation.

Fast lightning booting from USB3, even with a cheap Sandisk Ultra 32Gb USB stick. Much better performance than any other OS I’ve tried on Vim3 Pro so far and I’ve tried them all. I also tested it with a Sandisk Extreme Pro USB 3.2 and general performance speed and responsiveness level was unbelievable.
To boot from USB3, make sure to have latest mainline u-boot and “set port mode to USB” under Krescue "KBI configuration".
I tested it with TwisterOS Armbian installed on eMMC and Ubuntu Focal 5.12 Panfrost installed on eMMC as well.
It’s running fully overclocked by default, same as TwisterOS Armbian. Will run some stress tests to make sure it’s fully stable at high clock speeds.
Fan Script is working great out-of-the-box.
Enjoy it gentleman. Looking good, working awesome so far.

This is a great report, man. You’re my first independent validation. Really, I’m glad you got a clean firstrun experience, out-of-the-box.
This is the same kernel in the TwisterOS image, when you update from repo. Everything else of consideration is the Armbian build for Odroid N2+, with my finessing configurations for fan and audio.

WAIT! You got HDMI audio, on the full 64-bit? Or with armhf version of the image?
I can’t make HDMI audio work on arm64 mainstream Fenix - Ubuntu Focal or Debian Buster. I’m not alone!

I even tried plugging a powered USB3 hub on Vim3 Pro USB3 port without success.

Interesting. I need to check my Alsa mixer settings. If audio works, it’d be a first!
On SD media, the Armbian resize service works on firstboot. I wonder if this is behaving differently for /dev/sdX than /dev/mmcblkX?

@jtremblant I’ve verified HDMI audio output with a fresh regeneration from the image.xz, on my end. I updated the info for this Khadas forum entry, on the Archive.org page, and on the announcement in the Armbian forums.

Great works! I have a question: could I install Armbian on PCIE m.2 SSD?
What instructions should be followed for this?
Supported if MIPI-DSI output and Touch input?
Thank you!

Thanks for the feedback and update about this running on your VIM3. These responses are my visibility into level of interest, for continuing work on this!

I have to say that you are asking about a scenario that I haven’t tested. In principle, the Armbian nand_sata_install tool should satisfy your SSD case, just as it is supposed to for NVMe storage. @jtremblant is my storage maven, who’s tested so much of this, and might confirm.

Here’s an Armbian thread that supports this proposal:

Also, a nice commercial guide to nand_sata_install from Kobol for their Helios64 NAS, powered by Armbian:
https://wiki.kobol.io/helios64/install/transfer/

I hope this helps. I look forward to hearing your experience.

Amazing ~~~ Could you please tell me how to build this Armbian-style OS ? I would like to try my X96 Max Plus stb ( s905x3 ) but its uboot is too old to recognize the ext4 boot partition . Is it possible to make the partition as fat ? Regards !

After update the u-boot , I still have no luck to run the image . The updated u-boot , which supports ext4 partition , found s905_autoscript and automatically run it . Is that the expected entrance to the img. ? But the result is not expected :

Why “** Unrecognized filesystem type **” ? The u-boot can read ext4 format at the usb thumb disc. , what does the error mean on earth ? Regards !

This image is specifically for Vim3 w/ amlogic S922X-B/A311D CPU only. Amlogic S905X3 is currently not supported.