Run the unmodified iOS kernel image on the Khadas VIM3 (1)

Run the unmodified iOS kernel image on the VIM3 development board

IOS uses the xnu kernel. At present, Apple has open sourced the xnu source code (but the related driver code of the A series chip is not open). The specific source code can be found in the following Github repository:https://github.com/apple/darwin-xnu.git

The following are some articles experimented on QEMU. Through the following articles, you can learn a lot about the basic knowledge of XNU and IOS startup. You can directly enjoy the research results of Niuren to avoid repetitive wheel creation:

The above articles are written in great detail. Each series is divided into two parts. The first part introduces how to do it. The second batch records the problems encountered and how to solve the problems. Both of them provide many tools for Extract the required firmware from the IOS upgrade package.

Next, based on the research results of Zhuowei and Afek, the process of running the IOS kernel on the Khadas VIM3 development board through the hypervisor, the first step is to build a basic debugging environment:

Apple began to use the 64-bit ARMv8 architecture from the A7 chip. The following is some basic information of each generation of Apple chips

The first step we need to do is to load the extracted three images into memory, that is, we want to implement a simple IOS bootloader, IOS uses iboot as the bootloader, this part of the code is not open. Fortunately, Zhuowei has implemented the relevant code for loading MACH-O files in qemu. We only need to port these codes in qemu to Minos. There are two solutions:

Obviously, the second method above will be simpler and more practical, and the operation of reading files will be more convenient. The code mainly implements the following functions

In order to reduce as few problems as possible during the migration process, here I have allocated the VM as much memory as iphone6, which is 1G

With the configuration of 1G memory, I encountered a problem during the actual debugging process. Since the official Android image of VIM3 uses 32-bit and LPAE mode is not turned on, in order to simulate this situation, ARM FVP also uses 32-bit non-LPAE mode. The address space of the process under the bit is only 4G. By default, mvm will map all the memory space of the VM into its own process space. This means that it is necessary to find a 1G continuous virtual address space in the mvm process. This situation is almost not Too easy to satisfy. To this end, by modifying the mvm and hypervisor to achieve the function of mapping the VM specific area to the memory space, how much mapping is used. The specific implementation of bootloader can refer to https://github.com/minosproject/minos-hypervisor/blob/master/tools/mvm/os/os_xnu.c

Apple’s A series processors did not use ARM’s GIC series, but their own AIC. After searching the entire XNU code, only the AIC header file definition was found, and only the relevant register offset was defined in the header file. I do n’t know the principle of AIC ’s terminal controller. How can I send the interrupt message to the virtual machine? Fortunately, by looking at the previous two articles and the related code in xnu:

The entire FIQ process has only one big function. Ml_get_timer_pending in the code is used to determine whether there is a timer pending, and the implementation is also very simple. By reading the CNTP_CTL register and then judging the ISTATUS bit to determine whether there is a timer terminal pending, the reason for this implementation may be The software architecture of IOS / MAC is related to security. The AIC driver is implemented as a kext.

Because we only need a timer interrupt at the beginning, the support for AIC in Minos is very simple. You only need to send FIQ to the kernel. This can be done by setting the VFI flag of HCR_EL2. For specific implementation, please refer to https: //github.com/minosproject/minos/blob/master/virt/virq_chips/vaic.c

Like the interrupt controller, the support for the timer is also placed in the hypervisor. The IOS also uses the standard timer of the ARM architecture, but unfortunately the Physical Timer is used instead of the Virtual Timer. Fortunately, Minos already has a simulation of the Physical timer. , Only need to make a few changes, there are two specific changes:

Finally, in order to view the log output by the kernel, we also need to implement a virtual serial port device. The ios kernel uses Samsung’s serial port IP. The relevant code can be found in the xnu source code. The simulation of the serial port is implemented in mvm, which is currently only implemented. The most basic logging function is provided. The specific code is in the https://github.com/minosproject/minos-hypervisor/blob/master/tools/mvm/devices/s3c_uart.c file

Through the above work, we have the required image and the basic environment code that supports the IOS kernel. Everything is ready, but we owe it to the east wind. Next, we will carry out the first stage of debugging in ARM-FVP. We can start the VM with the following command

Through the above information, we can see that all the images have been loaded successfully. The entry address of the kernel is 0x470a5098. We set a breakpoint at this address

By disassembling and comparing with xnu start.S, it is found that the first instruction is the same, and it can be matched after a few instructions in a single step, indicating that our bootloader function is ok.

Solve the problem of page table, continue to run, and find that the serial port still has no log output, and hangs again. Through single-step and various debugging techniques (it must be said that it is really difficult to reverse a software without any symbol). Just find that the system has accessed SMID and floating-point registers are hung up, and later found that CPACR_EL1 is initialized to 0, that is, EL1 and EL0 can not access the floating-point module, this is simple, directly set the register value of CPACR_EL1 in the hypervisor 0x300000. But think about it later is definitely not so simple, finally found this article online

It turns out that IOS has implemented a set of kernel protection mechanisms through the secure monitor using floating-point modules. The kernel-related code can be found in the source code of xnu. This means that we need to simulate the entire process in Minos, but think about it since the value configuration bit 0x300000 can be bypassed first, use it first.

After solving the above two problems, I feel that victory is in sight, but the kernel hangs again. Through repeated debugging, I found that each hang is after executing the function 0xfffffff0070996c0.

Through repeated research on disassembly and existing kernel code, it is found that this function is actually the bzero function in the xnu kernel, and the implementation logic of this function is: it will determine whether the size of bzero is an integer multiple of 64 bytes, if If yes, call the dc zva instruction to directly operate the cache, then the size of each dc zva operation is 64 bytes, the size of the dc zva operation will be specified in the DCZID_EL0 register, and the xnu kernel does not judge the value of DCZID_EL0, use The fixed 64 bytes, in ARM FVP, the size is 8, which is 2 to the 8th power of 256 power, which results in the actual size of each DC ZVA execution is 256 bytes, which leads to the execution of this instruction The memory area that should not be cleared is also cleared.

So here we need to simulate the DC ZVA instruction, but fortunately arm v8 architecture provides this support

It seems that the road of debugging is difficult, but after solving the DC ZVA problem, I feel that it will be successful soon, because the code related to the processing architecture is basically run through the tracking code, and the actual situation is indeed the case. Finally, the kernel log has output

What is CryptoPlugin? No information has been found online?

Next step is run iOS kernel on VIM3, please see:

What is CryptoPlugin? No information has been found online?

Some links to check out:

No idea how you’d load this to the VIM3 or if that’s possible even, but at least the interface is documented so perhaps you can emulate it.

By the way, your last 2 screenshots don’t display.

yes, I upload the pictures here. 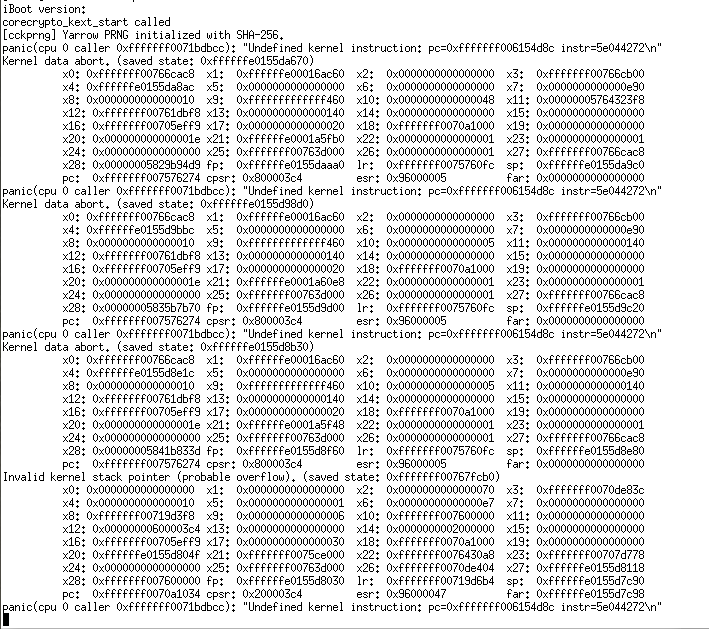 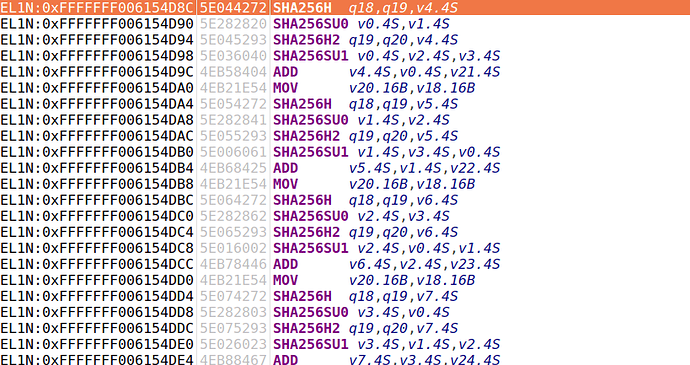 but armv8-a do not support trap these instruction

Huh, I would not have expected that.

you can check another article

VIM3 support these instructions, so on vim3 board, this issue will not happened. you can check another article

I have mentioned in the first article: With the purpose of studying the IOS kernel startup process and the relevant security measures of the IOS kernel.