Hi there guys and girls, one more rom/fw for you all!
Many thks to Khadas for sending me the device to play
And many thks to @Robert for be my beta tester

Ok guys im going to write the max i remember i did on sdk… i can’t remember all of it!
Build from Latest source.
Debug Build ( i might do in the future a rls build with my own keys )
I also added my layout(in zip format in internal storage) for squarehome3, is not hard to import it, i will make a video on how to do it in the next days… or just search youtube i bet there is something explaining it!

IF YOU HAVE TO MANY ISSUES IN THE BUILD AFTER FLASH EVEN IF THE FLASH WENT OK, JUST REFLASH AGAIN THE IMG BECAUSE YOU GOT A BAD FLASH EVEN IF IT SAID IT WAS OK.

Differences of USER and USERDEBUG builds:

User Build : This build is done to be as close to a company rls as possible, it does not have root or twrp and is compiled with rls keys and SELINUX enforced, what this means for you?
Well it means lot more apps show in Playstore that didn’t show before, (EX: my isp android live tv app, only shows in Playstore non rooted and SELINUX enforced devices, also the streams in the app does not even play in rooted devices.). Like this there’s lots of other ISP/NON ISP apps Out there…

UserDebug Build: This build does have root, twrp, selinux is permissive and some other stuff you will see in changelog down there…, but of course you will lose the above…

Want to buy me a beer?

THIS ROM DELETES ALL YOUR DATA SO DO A BACKUP!

USE AT YOUR OWN RISK!

thanks for the work, superceleron👍

Hi @superceleron .
Is it possible to add gps support in the rom?
I’m on a project and VIM3L is great for it, but I need GPS support. I will use a GPS via bluetooth or USB but when I go to the “location” setting it is only possible to set the location via Wi-Fi.

To late at this moment, anyway you can use in the next build the drop down menu, the one you pull from top to turn it on…
The side settings does not have it because it was made to androidtv and as you know ATV does not need GPS

Thanks. I have been researching in forums and I have discovered the" gps tether" app, and I think the problem has been solved with it. I have to test it more.

Updated 1º post with latest build, sorry no ota this time…
And plz read carefully the top of the post!

Is the audio working through the USB-c port?
Thanks.

Dunno really, you have to try it.

The Link is wrong, there are “VIM3L DEBUG” and “VIM3 DEBUG”, but no “VIM3L USER”, please correct that, thanks

Thanks, a best cheers 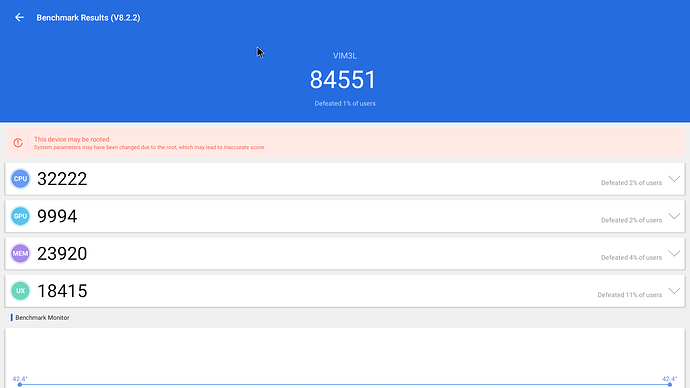