I bought the VIM3L because it has Coreelec pre-installed. I just powered on my new 3L and it boots into Android??? Please, how do I get it to boot into coreleec, preferably as the default?

Yes, I could go down that route but before doing so I wanted to make sure I’m not missing something (such as dual-boot) as Coreelec is supposed to be pre-installed.

this can be seen through the power button

Could you please explain that? If I press the power button on the remote control the VIM3L boots into Android.

I wanted to make sure I’m not missing something (such as dual-boot) as Coreelec is supposed to be pre-installed.

What’s the version of VIM3L you bought?

There are two versions:

Normal Version which pre-installed with Android.

HTPC Version which pre-installed with CoreELEC.

The VIM3L board is the same for these two versions, so you can install CoreELEC if you don’t want to use Android.

could there be a random mistake?

then it remains only to reinstall

If it boots into Android
You have received Normal Version of the Vim3L
There is nothing you have missed out on by receiving the Normal Version
EXCEPT there is no CoreELEC Pre Installed to eMMC.
You can burn a Krescue Image to an SD Card using Etcher.

Thanks very much for your detailed reply kostaman. I burned a rescue image on to a micro sd using SUSE studio imagewriter (I use Manjaro Linux). With the usb-c power removed, I inserted the micro sd and held down the power button on the VIM3L box and then attached the usb-c power. As soon as the led began blinking I let go of the power button and the system booted into krescue (no need to press reset button). I initially installed CoreElec nightly, which appeared to work, but I got a message that an update was available so I installed it. The installation failed with an error message that something couldn’t be mounted. I couldn’t read the message because I had not yet calibrated the TV so the message was mostly cut-off.

I repeated the above procedure but installed CoreElec stable and it works fine. Still a little disappointed that I had to do this when CE was supposed to be pre-installed.

I repeated the above procedure but installed CoreElec stable and it works fine.

Please use the the .tar in the link below. Simply copy it to the .Update folder of your Vim3L and reboot.
Nightly Vim3L

Please find the following links which are important in making your remote comtrol work.

Wake up and suspend CEC 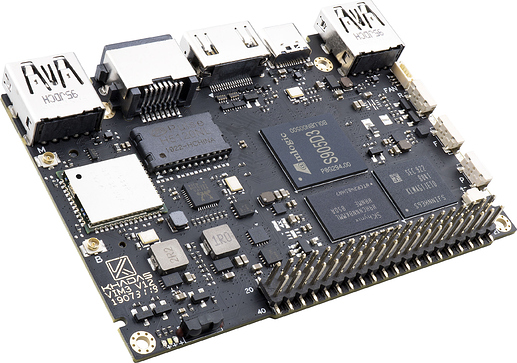 I installed the nightly and now the ethernet no longer works. I am going back to stable and I think I will stay there.

Very Strange.
I’m running it on the Vim3L and use ethernet.
Make sure it’s not disabled in the CoreELEC settings menu.
Not seen issues with Ethernet using Nightlies from any members at CE.
Be aware that the Stable Version of CoreELEC for the Vim3L is not fully up to date.
Double check the Ethernet and maybe report issue on the CoreELEC forum.
The next stable release is due in the next few days after we finish testing nightlies
with Leia 18.6
The Vim3L uses CoreELEC-Amlogic-ng.arm-9.2-nightly_xxxxxx
The others are Generic etc

Thanks kostaman, but as soon as I returned to stable the ethernet worked again. So far, everything works on stable. I think I will wait for the next stable release. BTW, my remote seems to work fine so do I need to add the remote.conf and the BL301 blob?

I have identified issues with Khadas Krescue CoreELEC images not being the Official Versions.
Been reported HERE
If you want official CE
You will have to clean install or wait for Khadas Krescue CE to be fixed.