hi to all gurus, sorry, my english is bad, so it is difficult for me to explaine precisely my problem. But I’ll try.

After weeks of search, the only think I can do, is booting my vim1 this the SCcard ubuntu Mate. (and of course, natively android).

My goal is to replace android with ubuntu 16.04 directly on the emmc so my vim1 boots directly on it at power on.

Is it possible to have a tutorial step by step, and not ambiguous

1)what image I must use (or what imageS)
2)how i use the image(s) and in what order (first do this, second do that…)
3)is it necessery to use the buttons, which of them, simultaneously or in what order…

My goal is to use my khadas with Linux. only that.

purhaps i have a last question, if it is possible to make a complete and exact bakcup of de emmc memory BEFORE doing all thinks (and how to restore this exact backup).

Please, I’m so disappointed with my khadas, despite it is a good machine !

Hello, I think all your issues can be addressed.
1.) There are several Ubuntu varieties available for eMMC install. They can be found on Khadas Docs firmware page. You will use an image name starting with VIM in the name, do not use image names that start with VIM2.
Server and desktop versions are available. 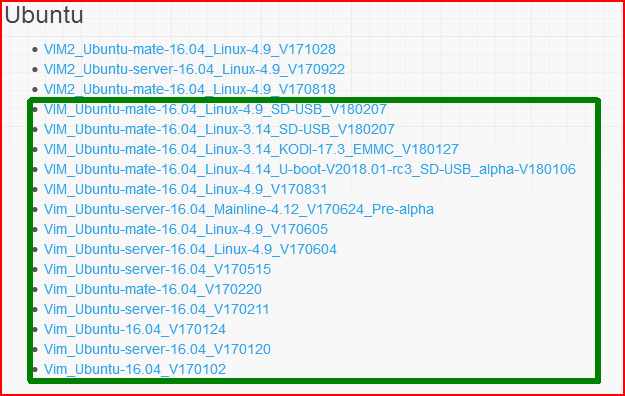 Once you determine which Ubuntu version you want to use, download the file. File will be a 7z(zip) file, extract the file. This will result in an image.

2.) The image can be flashed to the eMMC with one of two methods,
1.) using the Amlogic USB Burning Tool method
2.) using the Burn Card method.
If you need assistance after reviewing the guides, we will try to help.

3.) Buttons will be used to enter flash mode, this is explained in the links to Burn methods above.
When running Ubuntu from eMMC, no buttons(other than power button) will be needed.

Note: User @balbes150 has Linux varieties that can also be installed to eMMC. He has a script that will backup the entire existing eMMC to SD card. Info on this can be found here. Basically, it involves booting Ubuntu from SD card and running the ddbr script. The backup will be dumped to SD card. If you need further assistance, we will try to help.