Khadas VIM3 is launching on 24 June!

We’re still waiting for v11 to come back from the factory, so maybe we can test that next week.

Notes: @numbqq says that the driver for USB P.D (power delivery) has not been installed yet, so both results are similar.

With this methodology the shown numbers are worthless. The Amlogic BSP implements thermal throttling so it’s important to monitor temperatures and clockspeeds at the same time since if throttling occurs consumption decreases as a side effect.

Yup I am aware of that. Also a better test would be to have USB P.D enabled, otherwise I’m quite sure the results will be similar to that of a VIM2.

What “common” SATA ports are we talking about ?

You have the equipment S922 with a connection option SATA M2 for comparison with the M2 NVMe ?

This is written in the documentation (description) VIM3 that when you turn on NVMe USB 3.0 is disabled. This is a known issue of s922. Everyone knows that.

Which would require u-boot with working NVMe drivers otherwise your only option with that limited space in SPI NOR flash is chainloading Linux kernels, right?

I haven’t yet seen how specifically u-boot is implemented to be used on VIM3, but I don’t see a problem in adding the necessary driver to u-boot. Also, there is already the first implementation of u-boot-2019 for s922, given that u-boot is the Linux kernel, I don’t see a problem with adding a PCIe driver (as it was done for EDGE to the mainline kernel).

What “common” SATA ports are we talking about ?

Those that exist outside of small vendor communities. With an average SATA port and an average M.2 SATA SSD we get today sequential and also random write and read speeds that exceed what’s possible with NVMe SSDs on Vim3 due to the simple fact that S922 is only capable of a single Gen2 PCIe lane (and really fast NVMe SSDs want a Gen3 x4 interface which is an 8 times faster host interface). The bottleneck here is simply the board’s PCIe implementation.

But as you pointed out there’s no alternative to using NVMe SSDs anyway since S922 is not SATA capable. Though people thinking about NVMe speeds they’re used to on other platforms will be disappointed as can be seen by the fio tests Gouwa did.

And I don’t think everyone is aware of this major S922 limitation that USB3 will be gone once PCIe/NVMe will be used even if it’s mentioned somewhere in the docs. That’s why I pointed it out again.

Also, there is already the first implementation of u-boot-2019 for s922

This was the missing piece of information (I didn’t pay close attention to anything around S922 the last months). Yep, with mainline u-boot PCIe/NVMe support might work and a bootloader in SPI NOR flash can run an OS directly from USB or NVMe storage.

For me personally the most important information around VIM3 launch is Gouwa’s NVMe test since this confirms that PCIe on S922X is usable. Unfortunately Khadas only focuses on fancy and cool looking stuff with full feature set resulting in high prices. But for me as a ‘use case first’ person with NAS and server use cases in mind a VIMS (S for server or NAS) would be the greatest device in 2019.

Simply remove everything not needed, add an ASM1061 for two SATA ports (and plan a Pro variant with an Marvell 88SE9215 for four SATA ports), combine this with a stackable enclosure allowing for efficient passive cooling (see ODROID HC2), 12V input and done. The OpenMediaVault HC2 image gets installed +200 times a week so if Khadas would manage to provide this at a competitive price (same as or below HC2) and manages to keep full compatibility with VIM3 and allows for a stackable design supporting 2-4 3.5" SATA disks then this would really sell well (if Khadas is faster than Hardkernel here).

IMO the best use of the single PCIe lane on S922 with the specific highly energy efficient NAS and server use cases in mind.

I don’t have a VIM3, so this is just a guess. According to my data

, the distribution of the real speed (with the active use of read/write when compiling large projects) on S922 is about this. SD cards, eMMC, USB 3.0 (obviously good media that meet the parameters of USB 3.0), NVMe. This is not a 100% guarantee of such behavior, it is only a General trend and much depends on the specific parameters of the equipment used.

Okay guys, our VIM3 contest is live at: https://khadas.com/vim3 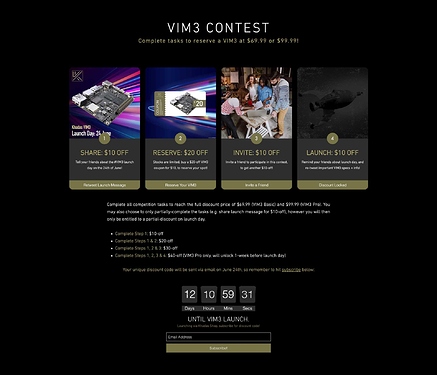 Complete all competition tasks to reach the full discount price of $69.99 (VIM3 Basic) and $99.99 (VIM3 Pro). You may also choose to only partially-complete the tasks (e.g. share launch message for $10-off), however you will then only be entitled to a partial-discount on launch day.

Your unique discount code will be sent via email on June 24th, so remember to hit subscribe if you’ve only completed step 1.

So if I understand well the contest, the normal price of vim3 (basic or pro) are 40$ more than current displayed price. The contest offers great discount, but I’m a bit disappointed compared to the price of Odroid N2.
The main advantage is the nvme port even if the single lane will limit performance and I agree that a version with sata ports will provide be a great NAS solution.

Is the headsink a must have or a nice to have?

I want to buy the pro wit headsink but without the Fan.
Just want to use Kodi with coreelec

The cooling fan is not a must for your use case due to the 12nm SoC process.

how do you know about #1 retweet launch day?

in #2 i buy the Coupon an write my twitter name in the notes field:slight_smile:
“hope this is correct?”

in #3
how you know the correct email for the discount code? the email i used in #2?
Because my twitter mail is another one

i subscribe with the mail i used for the 10$ Coupon

in #2 i buy the Coupon an write my twitter name in the notes field
“hope this is correct?”

Yes this is correct.

in #3
how you know the correct email for the discount code? the email i used in #2?
Because my twitter mail is another one

When you did step #2, your email was registered in our system. It would be best if you put that email address into #3, along with your friend’s order #. Don’t re-use your own order #, as we can tell that it’s yours.

haha oh… i misunderstood #3
i used my one order#

You can still get your friend to do #2, and then input his order# into #3.

mhhh i dont know a friend who neets the VIM3

maybe anyone here will be my friend so we share order# ???

Yes you can do that actually, however each order # can only be shared once, to qualify.

Oh shit! I have put in my own order

It’s okay, you can always do it again with your friend’s order.