Has anybody managed to get Khanas LCD to work with VIM4?

I have VIM3 setup and the new display works fine with it but I don’t get either of my Khanas LCD displays to work with VIM4.

I managed to set the system up through HDMI and USB keyboard into the OOWOW Android build and even see the landing page through HDMI but LCD refuses to work.

Either I need to do some special SW setting trick or my flex/VIM4 MIPI-DSI is broken.

Has anybody managed to get Khanas LCD to work with VIM4?

Have not tried on the VIM3, I have had the display for and decided to try it out on the VIM4. Thought it might have been me not getting the ribbon cables in properly.

Thanks for confirming that there is nothing wrong in the hardware setup. Looking forward test driving 64-bit Android firmware once ready. My VIM3 works for my purposes right now.

I have my lcd on way, waiting for it to arrive. Have you tried it with Ubuntu?

I haven’t tried as I need Android for my project. If I remember right, OOWOW UI didn’t come up with LCD so I needed to install the OS using HDMI display. This doesn’t mean that Ubuntu wouldn’t work as based on the earlier comment, it seems to be determined by the driver support.

What case are you using with vim4 and lcd? I have the diy case for vim3 that fits my vim4 perfectly and I’m planning to either buy one or 3d print one. Any recommendations?

@Mikko_Jaakkola You can use OOWOW to install 64bit android now.

Perfect! Display is working now but it is 90 degrees off. Left side seems to be the top and the right side is bottom. The icons are also squeezed making the whole display looking funky. Here is the picture of the landing screen. As you can see, the settings icon is far from being square. If there any way for me to change it myself or do I need a new build? 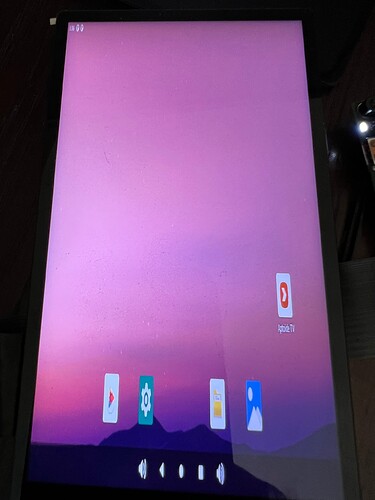 It seems that I missed it and thanks for point out that this is a known issue. Any LE to fix that issue? This is next to impossible to use any of my demos right now.

@Mikko_Jaakkola It will work out, but it will take time. If it is solved, I will inform you as soon as possible. In addition, do you only need a mipi screen display?

That’s the primary need for now. At some point, I need to be able direct video into HDMI out while keeping the local display showing the standard Android UI but that won’t be needed until sometime in fall-timeframe.

Did this issue get resolved? I have the same issue where the screen is 90 degrees out.

Nope. I saw in some other topic that the next major release will solve the issue but I haven’t heard any timeline for it yet.

@Mikko_Jaakkola @mtcl11 The problem has been solved, and the next release will be solved. A version of firmware will definitely be released next month.

Do you know when it’ll be released?